The human is an insincere animal

Maybe that’s why we love cats and dogs.

Had heard Cats are Bipolar, Dogs are schizophrenic.

I think it’s that animals tend to be more honest. But I know animals can get personality disorders, too.

Animals are pretty treacherous with other animals.

Monkeys are known to offer to groom each other, and then bite the other’s tail instead. Even if is up front, that pecking order dominance is usually pretty severe. Male cats fight each other like mad, and they kill offspring that aren’t theirs. All predators kill each other’s offspring, both within and without the species, if they’re not in the same pride, or group.

hampsters are the ones’ to watch, one day they are going to take over the world.
they have had a lot of time to think, going around and around on those wheels…it’s a conspiracy…!?!
take care

Don’t let them out of their cages.

hampsters are the ones’ to watch, one day they are going to take over the world.they have had a lot of time to think, going around and around on those wheels…it’s a conspiracy…!?!

We all know they are baby Wookiees !!! 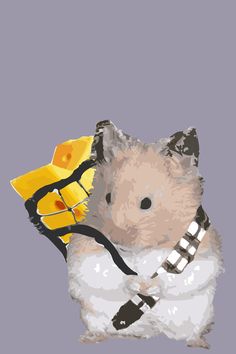 Some day the mini mutant gene will expire and hamsters will grow to their full size !!!

Higher intelligence gets us hurting each other…some of the humans are good to the lower creatures we have judged worthy. The classes of society have some of the humans incapable of even basic animal emotion of protection of their young, in favor of exploitation. So, you get sickos and profiteers. If all humans were on the same level, this could be over-come or conquered by evolution yet greed stands these higher in a protected position of power. Rest deny the suffering or regret it leaving victims wondering if we will survive all their problems. Sun sets, sun comes up and we age another day. Ants keep moving around this little blue marble at their work or be crushed.