Should i get this thing? (music)

I have a really good music production software called Ableton Live 11 and i was thinking of getting a Tutorial book but i came across the push 2 and watched some youtube videos about it, i think it would help me bc my eyes get sore really fast in front of the screen and it looks good value for money, it is a bit pricey though but has anyone else ever had anything like the push 2?

It looks like a pricey ripoff of the Novation Launchpad.

There seems to be a lot more bells and whistles on the push 2 than the launchpad. its tempting though the launchpad still looks very good but not as good as the push 2, i kinda think the push2 is kind of cheap for what you get but still pricey.

I can’t imagine it is any easier to use than the Launchpad, which is not easy at all. I think people are farther ahead in learning how to play a standard 88-key musical keyboard.

i’ve kind of stalled with my keyboard as well, and i’m getting a guitar but this push 2 device is very versatile and there are loads of tutorial videos on the website about it, i also found a couple other things that would improve it, like how to record play back and add other buttons,

It’s cool if you’ll get a lot of use out if it. I play my keytar a fair bit in the winter when it’s cold and I don’t feel like going outside.

I’m just trying to inspire a bit more music creativity in me, the music production course fell flat on its face for me and i’ve still not found the motivation for keyboard despite trying, i was going to get a synth a while ago but didnt get one,

Everything i have tried to do so far has failed so i need something to change, the guitar should be fun and hopefully help me write lyrics which i really want to do, if i can build a song and get an idea of a tune in my head its a starting point and hopefully i can build on that.

When you get it it could be a constant reminder of a mistake in your life. But the way you describe it, you want it, just to try it out. Maybe you should do more research on it.

I just bought the push 2 device off of ebay for just under £350 in excellent condition, i am really looking forward to this, i got a 10% off discount code as well and i used that so i saved around £40 with that, hopefully its not a bag of nails lol, its £599 brand new so excellent saving i think,

has anybody heard of this device? it works with the new ableton software here is a little bit about it… 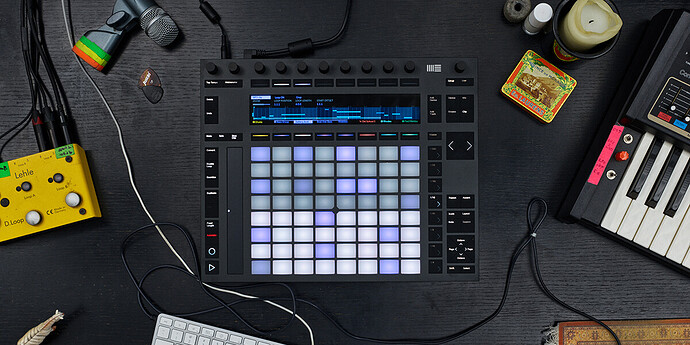 Push is the music making instrument that perfectly integrates with Ableton Live. Make a song from scratch with hands on control of melody, beats and structure.