Sheep in wolfs’ clothing, defined by http://www.urbandictionary.com as

Someone who appears to be strong willed powerful and very independent when inside they are humble lonely and weak.

Are you a sheep in wolfs’ clothing?

My behavior is too scattered and erratic to characterize it with a simple phrase.

My behavior is too scattered and erratic to characterize it with a simple phrase.

Does it help if you take personality test? Or at least try to find out your strengths and weaknesses?

That’s not what it means, though. UrbanDictionary is not very trustworthy. But it’s a great expression. We have the same expression in my language. A Wolf in sheep's clothing is an idiom of Biblical origin used to describe those playing a role contrary to their real character with whom contact is dangerous, particularly false teachers. As a fable it has been falsely credited to Aesop and the theme is now numbered 451 in the Perry Index. The confusion has arisen from the similarity of the theme with fables of Aesop concerning wolves that are mistakenly trusted by shepherds; the moral drawn from these is that one's basic nature eventually betr...

"A Wolf in sheep’s clothing is an idiom of Biblical origin used to describe those playing a role contrary to their real character with whom contact is dangerous, particularly false teachers. "

Edit: Oops! I see what you did there. Disregard this.

I’m not a sheep in wolf’s clothing.

I am lonely miserable and weak but I am surviving this ■■■■ so I am tougher than so many people.
Me being a sheep or a wolf does not matter much because it does not involve other people. I am too busy with myself.

When the going gets tough, the tough get going.

Yah none of these terms describe me. I am neither a wolf in sheeps clothing or a sheep in wolfs clothing. I think I have a balance between sheep and wolf both on the outside and inside.

I would say I’m more of a carnivorous sheep. 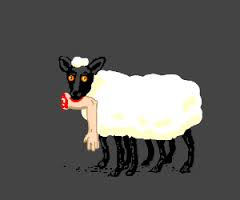 It might. I’ve taken the mmpi before, but they didn’t give me the results.