Trolls just make noise and start arguments repetatively and for no reason. Just folks on the web looking to argue or cut people down.

I see myself slipping into that behavior a bit more these days. Just losing interest in the site and trying to compensate by just spitting out crap. It’s horrible and unkind and totally misdirected.

So you might see in another thread my good bye notice.

I gotta get away feom talkingg to people so muh andjust work on being happy.

On this site, trolls are usually creepy people who try to prey on people with mental illnesses. They try to befriend folks, and then turn manipulative, trying to make them even crazier. Some even try to steal that sweet, sweet disability money. Derailing a thread is just normal, everyday stuff that happens.

from what I remember the trolls were just big liars,

fabricating everything, and all life and death.
I don’t recall disagreements.

But anyway, the term is used too often.

There is some stuff we should just keep to ourselves.

I remember, one night, someone posted a thread about jerking-off. even after leaving the forums, I couldn’t fall asleep. really made me think of why I’m sz

Don’t recall we ever spoken about sex @Azley?

Don’t put it near light, especially sunlight, it can kill them.
Don’t let it get wet with water nor give it any water to drink nor bathe it.
No matter how much it cries or begs, NEVER feed it after midnight. 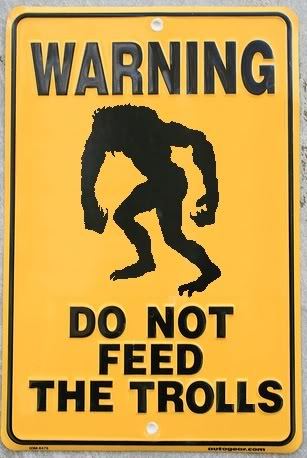 Be Agreeable, Even When You Disagree

You may wish to respond to something by disagreeing with it. That’s fine. But, remember to criticize ideas, not people. Please avoid:

Name-calling.
Ad hominem attacks.
Responding to a post’s tone instead of its actual content.
Knee-jerk contradiction.
Instead, provide reasoned counter-arguments that improve the conversation.

Hit the report button if you see a problem. Leave it to the mods. Most trolls get off on being passive aggressive. Leading the commenter to make the mistake often being the one to get suspended and not the troll.

We so need a ignore button here. But you can silence the post itself.

Muting a topic or category Meta

This was recently brought to my attention in another thread. Some may find this a useful feature of the site. You can mute a topic so that ‘You will never be notified of anything about this topic, and it will not appear on your unread tab.’ This option can be found at the bottom right by clicking on Tracking. This list is Watching, Tracking, Regular and Muted. [image] You can also mute a category. [image]

Also a new feature just installed on the software is the ability to stop receiving notifications from any member. Which is right down the bottom in your profile preferences

Under Users Muted. There is a box. just start typing the name of the member you wish the notifications to stop notifying you in the box. There is a bit of a automatic name window much like the @ feature… I hope that explains it. Oh and remember to click “Save changes”…

I can’t lie I’ve been thinking about sex a lot lately. It’s been only less than two months. I think I’ll meet a girlfriend eventually on the west coast. I have been playing the patience game. Not seeking it out but have been thinking if it

The patience game is better when you do it around a girl, just FYI. Just be around her. Be a piece of furniture in her world. If you don’t get friend zoned she will give you a chance. That’s the patience game.

I guess I’m kinda doing that with this girl in my class I’m interested in. But only have class once a week. Other than that I don’t make much interaction with females. The waitress was super nice to me tonight at the burrito place I could tell she liked me. And the girl who works at the mailroom I like a lot too. My self asteem has gone up in regards to interaction with the opposite sex since I moved here but not much real opportunity yet.

what if she friend zones you and then you start making out… like a lot… then she just teases the ■■■■ out of you and disappears all the time.

hah the girls in my life that aren’t hos are my mother and my sisters… wassup with that.

That sounds rough for the genuine lover guy. Some women are confused about what they want, i suppose.

No, you’re wrong, sometimes I stand.

Ironic, if you have a dirty mind like me this sounds sexual.

Ha! Thanks @Azley. I don’t count any of my posts as successful until I get the, “77nick77 strikes again”

why not? Talking about sex is fun.

Where are you talkin about ?