Schizophrenia 'helped the ascent of man'

The book: The Madness of Adam and Eve: How Schizophrenia Shaped Humanity by David F. Horrobin 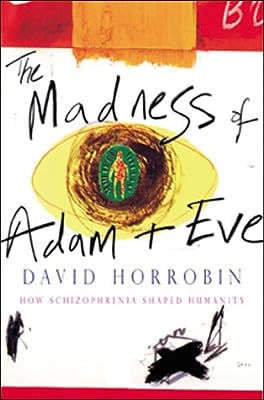 This volume presents an argument which aims to fundamentally alter our view of the roots of humanity and answer questions of how a species of clever ape evolved into something different. Schizophrenia ...

Schizophrenia 'helped the ascent of man'

Tiny mutations in our ancestors' brain cells triggered mankind's takeover of the world 100,000 years ago. But these changes also cursed our species to suffer from schizophrenia and depression.

"…
‘We became human because of small genetic changes in the chemistry of the fat in our skulls,’ he says. ‘These changes injected into our ancestors both the seeds of the illness of schizophrenia and the extraordinary minds which made us human.’

Horrobin’s theory also provides support for observations that have linked the most intelligent, imaginative members of our species with mental disease, in particular schizophrenia - an association supported by studies in Iceland, Finland, New York and London. These show that ‘families with schizophrenic members seem to have a greater variety of skills and abilities, and a greater likelihood of producing high achievers,’ he states. As examples, Horrobin points out that Einstein had a son who was schizophrenic, as was James Joyce’s daughter and Carl Jung’s mother.

In addition, Horrobin points to a long list of geniuses whose personalities and temperaments have be-trayed schizoid tendencies or signs of mental instability. These include Schumann, Strindberg, Poe, Kafka, Wittgenstein and Newton. Controversially, Horrobin also includes individuals such as Darwin and Faraday, generally thought to have displayed mental stability.

Nevertheless, psychologists agree that it is possible to make a link between mental illness and creativity. ‘Great minds are marked by their ability to make connections between unexpected events or trends,’ said Professor Til Wykes, of the Institute of Psychiatry, London. ‘By the same token, those suffering from mental illness often make unexpected or inappropriate connections between day-to-day events.’

According to Horrobin, schizophrenia and human genius began to manifest themselves as a result of evolutionary pressures that triggered genetic changes in our brain cells, allowing us to make unexpected links with different events, an ability that lifted our species to a new intellectual plane. Early manifestations of this creative change include the 30,000-year-old cave paintings found in France and Spain.

The mutation Horrobin proposes involves changes to the fat content of brain cells. ‘Sixty per cent of the non-aqueous material of the brain is fat. Humans have bigger heads than chimpanzees because their heads are full of fat.’ By adding fat to our brain cells, we were able to control the flow of electrical signals more carefully and make more complex connections within our cortexes.

Our ‘schizophrenia inheritance’ was ‘the single most important event in human history’ and marked the break ‘between our large-brained, possibly pleasant but unimaginative ancestors, and the restless, creative creatures we are today,’ he adds…"

Guess my dad was right when he called us a bunch of ‘fat heads’.’

Practical lesson from this:

Evolution is a lie

Butter is delicious. Margarine is pretty much plastic.
The brain needs fat, not plastic.