Double Bind as a Theory

Bateson et al. (1956) proposed that schizophrenic symptoms are an expression of social interactions in which the individual is repeatedly exposed to conflicting injunctions, without having the opportunity to adequately respond to those injunctions, or to ignore them (i.e., to escape the field). For example, if a mother tells her son that she loves him, while at the same time turning her head away in disgust, the child receives two conflicting messages about their relationship on different communicative levels, one of affection on the verbal level, and one of animosity on the nonverbal level. It is argued that the child’s ability to respond to the mother is incapacitated by such contradictions across communicative levels, because one message invalidates the other. Because of the child’s vital dependence on the mother, Bateson et al. argue that the child is also not able to comment on the fact that a contradiction has occurred, i.e., the child is unable to metacommunicate (Bateson et al., 1956).

The symptomatology of schizophrenia, it is argued, reflects the accommodation of the individual to a prolonged exposure to such interactions. Once ‘victims’ have learned to perceive their universe in terms of contradictory environmental input, the inability to respond effectively to stimuli from the environment is no longer contingent on the extent to which stimuli from the environment are contradictory in specific interactive sequences. Instead, the individual will generally experience any input from the environment as conflicting information without being able to discriminate between different communicative levels. In the long run, this inability manifests itself as typically schizophrenic symptoms such as flattened affect, delusions and hallucinations, and incoherent thinking and speaking (Bateson et al., 1956).

It is further stipulated by Bateson et al. (1956) that double bind interactions have a pathogenic effect only if they occur in a context where the accurate discrimination of messages is of vital importance for the participants, and in a relational context which is characterized by intense levels of involvement between the participants. The interaction between parents and children within the nuclear family is a typical example of such a relational context.

At least the following twelve components can be distinguished in double bind theory with potential for operationalization as variables in empirical work: (1) schizophrenia, (2) conflicting injunctions, (3) communicative levels, (4) prolonged exposure, (5) ability to comment (6) escape from the field, (7) intense involvement, (8) discrimination of levels, (9) relational context, (10) learning to perceive, (11) double bind patterns, and (12) vital importance of the relationship. The interrelationship between these components is clearly stated in the theory, but too complex to be captured in a single hypothesis. We need to recognize that different hypotheses derived from this theory may fare differently upon empirical scrutiny.

Thank god we now know its mostly genetic and have meds. I can’t believe they did lobotomies by hammering screws in the eyes to destroy brain tissue. It made them zombies and dead.

I can respect them trying to define schizophrenia as a purely psychological disease that a person can just will him/herself into, but I feel that is a dated assumption.

What a waste of time and money. A disgrace to call yourself a psychologist or psychiatrist. Most of these people should be bagging groceries. Im ignoring the fact that psychology and psychiatry is a pseudo scientific field and is not a real science. We need visionaries and pioneers, not frauds. Im not saying meds don’t help us, but I think its funny. The meds work on 1 or 2 receptors and they have no clue how they work. They are treating, not curing and charging thousands per month per prescription.

Why not just give us the cure instead of stupid meds that work on some new miracle receptor? Its caused by a virus plain and simple. Maybe they’ll figure it out 100 years from now.

I actually feel there were indeed a lot of such double binds in my family of origine and in the relationship with my (narcissistic) ex, and it drove me crazy. People you are highly dependent on communicating in such a way is destructive, confusing. I know i always got frightened by it as a kid and in psychosis i was scared of people who had “two faces”. 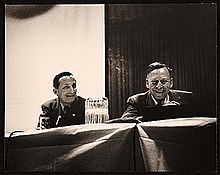 Gregory Bateson (9 May 1904 – 4 July 1980) was an English anthropologist, social scientist, linguist, visual anthropologist, semiotician, and cyberneticist whose work intersected that of many other fields. His writings include Steps to an Ecology of Mind (1972) and Mind and Nature (1979). In Palo Alto, California, Bateson and colleagues developed the double-bind theory of schizophrenia. Bateson's interest in systems theory forms a thread running through his work. He was one of the original ...