Soooooo handsome he was.

“Guess Who’s Coming to Dinner” is a classic.

It was a very brave role to take on in that movie.

It’s a shame they did a silly remake of such an amazing film. 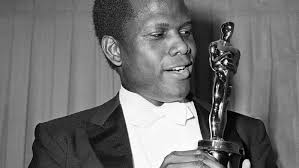 “Well they say that Sidney Poitier was a blind man.
And they say that LBJ was a Soviet Jew.”
Butthole Surfers " Movin’ to Florida"