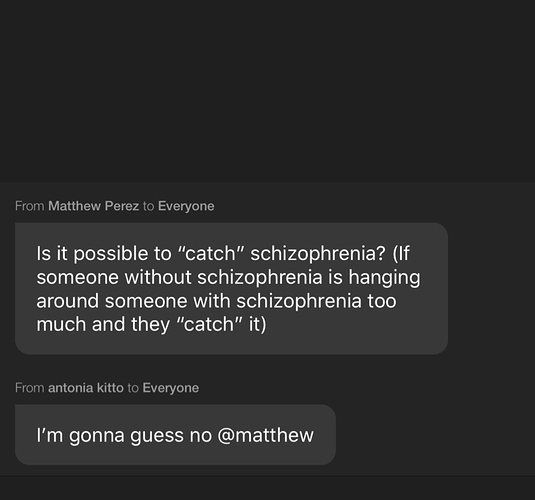 Yes, that is pretty ignorant. They obviously know next to nothing about Schizophrenia.

My book name for my Psychopathology class was Abnormal Psychology.

I believe Hollywood could be instrumental in changing people’s perceptions, however they’d much rather portray those with SZ and SZA in a negative light.

Yea ppl like action and violence so they portray all schizophrenics as violent eventhought under 20% are violent.

An education is a nice thing, if one can get one.

I was a psychology major. But even studying mental disease you kind of assume it’s not contagious. People don’t really know much about schizophrenia. Unless you took a class you don’t hear anything about it.

Until I had sz I thought it meant you had multiple personalities. It’s just very misunderstood.

I understand your viewpoint. Although for me, i personally don’t think it was just the ignorance behind the question but the way it was phrased as well. The question in itself also seemed like it came from a place of assumptions, rather than this person actually wanting to know. Not to mention it completely just caught me off guard since it is an upper level psychology course. All in all I just feel that the delivery of the question is a prime example of how a stigma starts.

I agree with you. An education is a nice thing and it should be easily available.

That’s just stupid. How can someone be that ignorant?

For that reason I never tell people I have sza aside from family members. Usually I’ll just say I suffer from depression. Even that whole multiple personalities bit is tiring.

“About 11% of people in prison for homicide have schizophrenia and 21% have mood disorders.[ needs update ] Another study found about 8-10% of people with schizophrenia had committed a violent act in the past year compared to 2% of the general population.” 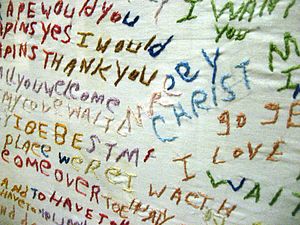 Schizophrenia is a psychiatric disorder characterized by continuous or relapsing episodes of psychosis. Major symptoms include hallucinations (often hearing voices), delusions, and disorganized thinking. Other symptoms include social withdrawal, decreased emotional expression, and apathy. Symptoms typically come on gradually, begin in young adulthood, and in many cases never resolve. There is no objective diagnostic test; diagnosis is based on observed behavior, a history that About 0.3% to...