One of many reasons I hate banks 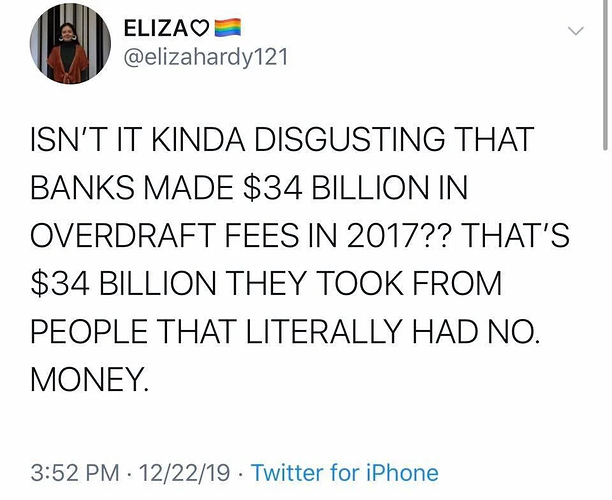 we dont have overdraft fees in south africa if you want an overdraft its a seperate aplication and kinda works like revolving credit the $35 overdraft fee is kinda what we pay for a bank account for a year, but there are bank accounts that have no monthly fees 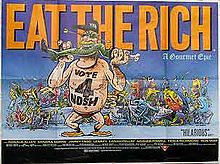 Eat the Rich is a 1987 British black comedy film directed by Peter Richardson. A co-production between Channel Four Films, Iron Fist Motion Pictures and Michael White Productions, it features cast members from the popular television series The Comic Strip Presents.... The film stars Lanah Pellay, and Nosher Powell as the Home Secretary, and includes cameos from a number of well-known figures, including: Miranda Richardson and Nigel Planer as vile DHSS clerks, Robbie Coltrane, Rik Mayall as a ... 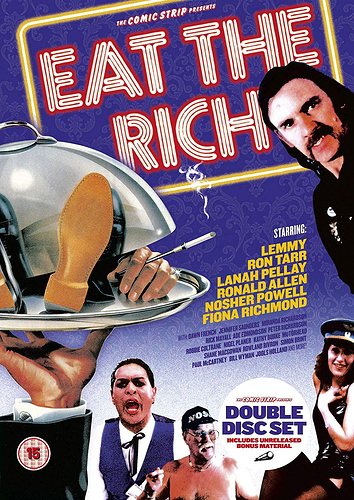 I was trying to explain this to a friend recently. They were trying to double his overdraft and he thought they were doing him a favour.

Gotta say, I wasn’t expecting the anti-capitalist turn of this thread, but I’m loving it! Viva la revolution!

Gotta say, I wasn’t expecting the anti-capitalist turn of this thread

I’m not anti-capitalism. I just believe that capitalism that is not tempered by conscience does more damage than good.

Lol I should probably close it because of politics but the line between politics and morals is so unclear.

politics but the line between politics and morals is so unclear

We don’t have the same politics, but we both think it’s uncool to victimize people who are already suffering penury. That’s some good common ground, nie?

Yeah @velociraptor you and me are like the epitome of “we have the same goals, but different paths to get there”

When I bought Vlad the Impala, TD Bank was one of the companies that offered financing. Didn’t take it, went with Scotia instead. I also made a point of calling the president of the TD branch back for a convo. Pointed out that I remember being shooed away from one of their branches back in 1992 because I was homeless and undesirable. 28 years in AA later and they like my phat credit rating. Yeah, well…

Always keep in mind that the person you treat like shiz today could be someone you need tomorrow.

When I was homeless I got tired of the people in the bank who controlled everything. I went in one, saw a couch and started sleeping. I wouldn’t leave, they called the cops. I guess my protest never made it to the news

I kinda like that solution. They’ll go good with some farve beans and a nice chianti.

It’s a good idea as long as the restaurant has a drive-thru.

I once got into debt with an overdraft I didn’t have. They allowed three payments of under £5 to go through, and charged me £30 for each one.

I went straight down the bank and closed the account and refused to pay them the charges.

When I was 18 I worked in a tobacco company that made cigarettes out of cocoa leaves. My bank was a small bank and when I walked in every two weeks to cash my paycheck all the tellers loved me because I smelled like chocolate and I made the whole bank smell like chocolate.

Bank of America banned me from having an account with them for 5 years because I bounced a bunch of checks for drug money. They didn’t know the drug part though.

One of my granddaughters is struggling to get out of going into her overdraft . She does care work , and I think most of us know how badly paid care workers are .

Apologies if I’ve derailed the thread .