Nothing a little Beatles won't cure

Tough day at work, I got 7 hours of sleep the night before but by noon I was barely plodding along. Also, I didn’t fix a lunch.
But I got off 15 minutes ago and I’m sitting in my car in the parking lot listening to my new Beatles CD and eating Wheat Thins and I’m resting and feeling a little better and getting ready to drive home

Never underestimate the power of “Norwegian Wood” or “Eleanor Rigby.”

I had morning wood, but listening to the Beatles made it go away.

I was just talking to my cousin about the Beatles and we couldn’t quite figure out what the first album they did in stereo, plus I showed him a youtube clip of George Harrison performing the “Pirate Song.”

Must be Beatles synchronicity because this pic showed up on my Facebook feed of our cat enjoying our vinyl. 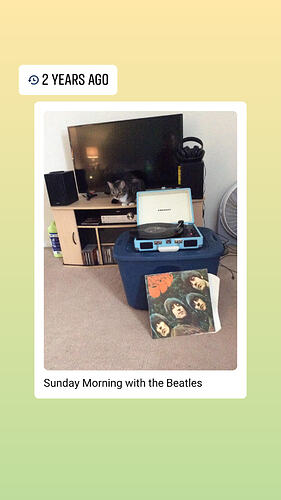 I love the White album. Just acquired it recently on vinyl.

Hope you can rest tonight 77.

My ex got me into the Beatles. Never really spent time on late 60’s and early 70’s rock. It’s good stuff. Yeah I like my era more because punk was just as revolutionary and there’s other stuff out there but it’s solid work that they did. Except Ringo. Everyone else’s solo stuff was good as well and there’s some classics in that.

So. It’s nice to have an appreciation for the beatles even if your into punk rock.

“norwegian wood” is good book by haruki murakami too =)