Not feeling so hot

In my dreams I’m always trying to escape, to get “home” but I realized that I don’t know where home is or what it is.

I met God when I was 14 and I didn’t know how to properly speak with him yet but I felt his warmth and his love and I knew he was with me.

At 16 I could speak with him. I talked with him constantly. He told me “Don’t forget we love you” but how could I possibly forget? We could not be separated, I thought.

But at 17 he was fading and I was losing him. Panic…and then absolute silence. No speech and could not sense him.

I question if I have ever really properly spoke with or felt him since then.

And God is simply never in my dreams. But the demons are.

The demons are an ever present reality. They are with me always. I have spoken with them I have felt them and seen them. Maybe I have talked with the devil too. Not sure on that as all demons like to say they are the devil. Perhaps they are though.

I am afraid I am far from home. I saw once in a vision an angel who sat on a throne in a crumbling cathedral. Large black wings that filled all the space behind him. I suppose now he must’ve been an angel of death. And in the vision a massive beast walked in on all fours, huge bull horns with the body of a gorilla and cloven hooves and in front of it stumbled a small girl in a white dress. And the girl walked up to the angel, looking at her feet. The angel stood and embraced her and her arms hung limply at her sides. I suppose now he must have been an angel of death. I think he intends to keep me far from home. I wonder what I shall do. “You can hide but you can’t run” a voice told me once. Am I only hiding now?

I just want to go home. I need help.

What do you mean by home?

I don’t know. I just realized I don’t know where home is. I think that’s why I can never find it.

Anyways the man in red was standing at the foot of my bed. He doesn’t always wear red so I guess I shouldn’t call him that. I was talking with him. I told him to leave me alone and I just wanted to go home and he said my home is with him. He says he won’t do anything to me I don’t want to, he just needs me to be with him. But I don’t understand why. I want him to let me go. I feel very sad and lost.

Do you take your meds? Maybe you need an adjustment…

In my dreams my home is still the place that I lived when I was a child and also my dreams are about the time before the time I got mental illness.
It is if my brain has not remembered the last 20 years.
I don’t dream about God anymore, they are mainly bad dreams involving conflict with other people, since I have been using Valerian Root tablets for sleep my dreams have got a lot more intense.

One day you’ll face up to the fact that you need an anti psychotic. I just hope it’s soon.

Do u not take any meds ?

I really know I do, which is why I’ve also been shopping for one.

I know that with 11 hours regular of sleep I don’t get symptoms but let’s be real, it is impossible in my world to regularly get 11 hours of sleep. Especially when my circadian rhythm is so messed up. There are simply far too many variables that can mess up my stability.

Sleep meds to me are more appealing than being on an AP just because shorter term they have less side effects, however long term they will cause a stronger physical dependency and are far easier to gain tolerance to, which means I’d probably have to constantly be cycling through different sleep meds my whole life.

Thus it’s far more rational to pick an AP and stick with that and then have it not really matter if I get 7 or 8 vs 11 hours. I really am trying to find one.

The two I tried recently were seroquel, which at higher than the smallest possible dose left me hungover with sedation well into the next day which wrecked the functioning the modafinil returned to me and gave me extremely vivid dreams I couldn’t escape from which at times was very distressing. However maybe over time this would stop? I didn’t give it very long and I know Zoloft was very sedating to me for the first couple weeks then wasn’t at all anymore. But geodon never stopped being sedating. And then I also tried saphris, which I was hopeful for, but it gave me terrible stomach cramps that woke me out of sleep. Dear lord…

I’m on depakote, and I was taking sleep meds that were helping me keep my sleep regular and my symptoms thus under control. However I weaned off sleep meds recently in preparation to start xyrem which is like THE king of sleep meds for people with narcolepsy. So lately has been totally nightmarish, like being on a bad trip all the time. And I fall asleep so late I sleep half the day away.

I knew this would happen and I guess I just thought it would be fine because I assumed I’d be getting the xyrem faster than it’s taking.

There are not many good sleeping pills that we can take, most of the ones that can be used long term cause daytime drowsiness.
I have not studied Xyrem but these are some of the side effects. 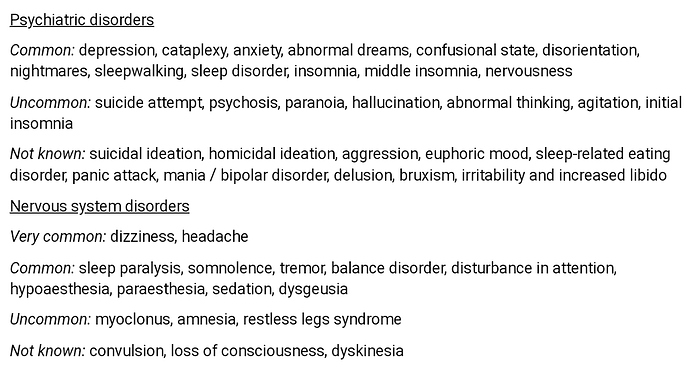 So far best combo for me seemed to be 50 mg seroquel and 1 mg Ativan. The Ativan helps prevent the vivid seroquel dreams from becoming nightmares, and also helps keep me asleep. However I quickly gain tolerance to benzos meaning this combo doesn’t last well long.

If xyrem doesn’t work out, I’m going to try saphris one more time, and if I still get the stomach cramps I’ll do seroquel.

I would go on an Antipsychotic if I were you @Anna

I don’t see any problem with taking 1 or 2mg of Ativan at night long term, sure you will get some tolerance to them, but as long as you never take more than that amount I think they will be good. And take your choice of Seroquel or Trazodone with them so you sleep well.
In the UK my doctor will not let me have more than 28 1mg tablets of Lorazepam a month, due to possible dependency.
Good luck with the Xyrem.

Nah I’m not worried about taking it long term as I’ve done so before and quit very easily it’s just I gain tolerance and it stops working very quickly. Usually initially starting it it takes 2 weeks and then after that if I stop and then go back on, in as little as 3 days I can start to see the effects lessening.

It surprises me how med-happy doctors in my new state seem to be. My old prescriber when starting me on a new med would give me 14 day supply to start. Here though I’m always given 30 day supplies. I have a verifiable pharmacy in my bedside drawer now. My mom says I need to get rid of them bc I look like an addict but I’m too lazy to drive in to the police station

You can ask your pharmacy. Sometimes they have return days where you can get rid of old meds.

I lied. Maybe this list is only police departments.