A new book (memoir/ biography) that is coming out from Nikki Dubose:

“I prance down the runway like a queen, my body dripping with jewels. Like a lioness, I sway from side to side, moving to entice all who look my way; I am the beast who no one can touch, and no one can tame. As I glance at the rows of curious faces, however, the darkness begins to take over. Before I know it, my worst nightmare has returned: the demons have revealed themselves, with their black eyes and mouths full of jagged teeth. I cannot escape them; they are my masters, and I am their slave.

Voices command me to keep moving. Look forward ■■■■■ and keep walking. Don’t screw it up! They’re all going to laugh at you. I force my head higher and put my shoulders back as I push through the noise and approach the end of the runway. As my feet carry me to the edge, I hear no sound, experience no sensation. Despite the music and commotion, I am lost in a dreamland.”

The above is a snippet from my upcoming memoir, Washed Away: From Darkness to Light. The scene describes a runway show in Miami, one that was supposed to further launch my career as a model in 2009. However, I had been suffering from a variety of mental health issues since childhood, mainly eating disorders, PTSD from sexual and physical abuse, addiction, and, unbeknownst to me: psychosis. I was constantly paranoid, to the point that I heard voices telling me what to do, and it hindered my work and relationships with others.

Nikki DuBose is a former model turned author, speaker, and mental health advocate. Her memoir, Washed Away: From Darkness to Light, is set to be released this Fall. In Washed Away, Nikki recounts her experiences navigating the dark side of the modeling industry, while battling abuse, addiction, and various mental health issues (sexual victimization, eating disorders, alcoholism, drugs, depression, suicide attempts, body dysmorphic disorder, PTSD, psychosis).

“By my early twenties, I was modeling professionally and appeared on the covers of and in editorials for magazines such as Maxim, Glamour, Vogue, FHM, and Vanity Fair. But while my career was going exceptionally well, my private life was falling apart. My mental and emotional health were in shambles. I went from one extreme to the other to meet weight requirements for photo shoots, and quickly fell into anorexia nervosa. At times I struggled to survive, beginning to abuse diet pills as a way to achieve the figure that my agents were pushing me to have for fashion shoots,” says DuBose.

Because of the lack of laws and protections, models have long been subjected to sexual and financial abuse, bullying from agents, and have been pressured to lose so much weight that many have developed devastating, even fatal eating disorders.

“My mission is not to vilify the business, but to educate the public and to further support why models need workplace protections and health standards,” says DuBose. “I’m speaking out in the hopes that others will come forward, use their voices and get the help they need. These are “silent” issues that shouldn’t remain so.” Nikki’s Past as a model:

does one get better, then write?

The insane female is overdone, in my opinion.

Addiction should be the focus, it’s hardest on the female role in society.

Mental illness is hardest on men, their role.

Addiction is a form of mental illness.

When I’m gone Pixel, I hope my daughter writes the book:

How I went unscathed from a family life of targeting, mental illness and addiction

and I hope you are there to read it.

The book is now out on Outskirts Press and Amazon.com 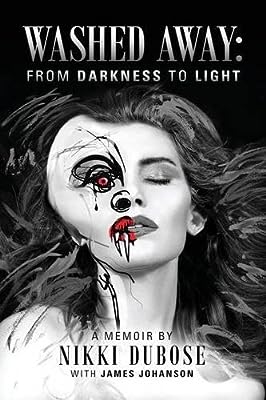 Washed Away: From Darkness to Light Nikki DuBose was a successful model in the high-glam, high-stakes fashion industry. She seemed to have it all--while in actuality she wanted nothing but to kill her ...