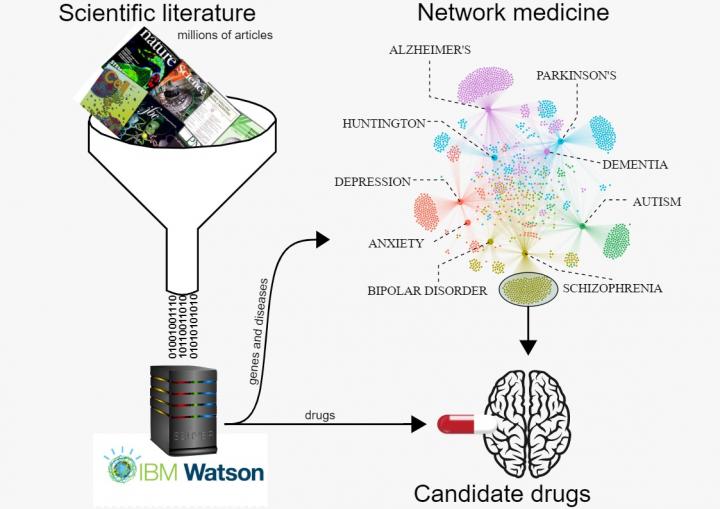 Researchers have correlated information on drugs, genes and diseases to identify potential candidates for psychiatric and neurological treatment. The methodology they developed will be used to search for drugs against COVID-19.

I found the paper:

Some schizophrenia-related genes were also promising drug targets (Fig. 4b) found both in WDD and Open Targets (Supplementary Table 5). ERBB2, an essential gene in the NRG1/ErbB signaling pathway, is targeted by six drugs—three inhibitors (AC-480, Mubritinib, and CP 724714) and three monoclonal antibodies (Trastuzumab, Ertumaxomab, and MM-302; Fig. 4b). This pathway is involved in schizophrenia due to its relevance to synaptic transmission and plasticity45. Moreover, it is known that NRG1/ErbB signaling triggers myelination in oligodendrocytes61. ErbB1 inhibition has been proposed as a potential antipsychotic approach62, and the anti-ErB2 monoclonal antibody Trastuzumab has been suggested as a possible treatment tool for schizophrenia63. We also found SLC6A9 (glycine transporter 1—GlyT1) inhibitors (Fig. 4b). Bitopertin (NCT01116830) and PF-03463275 (NCT01911676) are actually going through clinical trials for schizophrenia64,65 (Fig. 4b). Two anticonvulsant drugs (Levetiracetam and Brivaracetam) targeting the synaptic vesicle glycoprotein 2A are also promising in this respect (Fig. 4b). Levetiracetam (Fig. 4b) was found to improve cognition in a rat model for schizophrenia66. Brivaracetam (Fig. 4b) has never been used to treat schizophrenia, which makes it an attractive drug repositioning candidate.

The links are wrong though, bitopertin trials for schizophrenia weren’t successful (although we can’t say for sure that it wasn’t due to some factor like dosing, patient selection, stage of illness etc).

PF-03463275 actually does have an ongoing trial for cognitive impairment in schizophrenia which was supposed to end this summer.

There are FOUR studies recruiting on levetiracetam and schizophrenia and an additional one that is not yet recruiting.