There is a passage in the bio I read on this fascinating woman in which an admirer, Paul, a total angel, came to visit her years after she had already lived through quite the worst of her condition, and they went out walking in her town, it was a gorgeous spring day, and Zelda wore a heavy long coat with like a bonnet and a scarf with boots and a dress, and these two were giddy as all get out when they were passed by two young kids and one of the kids said to the other, “There’s that crazy woman I was telling you about,” and Zelda heard it, and she instantly became bothered, sullen, affected, and she told Paul she wasn’t feeling well and needed to go back home. I just want to cry every time I think of this, of the harsh reality of mental illness in the most subtle ways.

I’ve never knew much about her. It’s interesting that she has mental illness though. 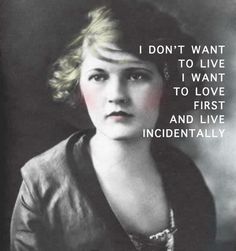 For many years the way of treating these eccentric people was a strict regimen, much like boot camp, through food, exercise, routine. But many of these like spas or retreats were expensive, even for a rock star like Scott Fitzgerald. Zelda really was a person who was triggered by Scott, by the fame, by the loss of her youth. So that when he died suddenly, it must have been like cutting off her own arm, or leg. She died a few years later in a fire.