Life that is missing in action

Life is happening and, I find myself not playing my role which shouldn’t be replaced by any other Life under any circumstance if such replacement is contradictory.

And, sometimes it’s like being there standing by the side of life that you alone find yourself doing magically.

And sometimes it’s all about you alone giving birth to children who are special because we were all but a family and it’s a chance to find our self together again in a new World as we once were.

And most of the times it’s all about changing Life and the World itself. We must live as change brings conflict and it shouldn’t be an eternal conflict and we can only ensure to stop conflicts in its tracks if we do live and then we can only achieve such a phenomenal feat when we collectively have keys that help us in establishing a state where we don’t find overthrowing each other.

And yes, being the star of the show is itself contradictory if it’s not meant to be. Is replacement of life necessary to ensure balance? Many a time yes, but it can be controversial since Life is found to be unsatisfactory.

Ultimately the reason why I don’t find myself playing my role is I find myself preoccupied by my own concerns bothering me and no one else is found to be part of it. If other life is part of my concerns then I am sure I would never build a castle around myself and never see to it that others are banished from such a castle.

So, is this all about saying yes or is it no or is it about claims of being a rightful owner or is it about some judgement day. The truth is I’m absent because I just don’t fit in. If I could fit in I would definitely be inclined to be part of it.

It clearly shows that I’m found to be thinking and also found to be missing walking in the footsteps of other life and thus I rest my case for I am found to be born only to live such a life. So, this is my life in short, or is it?

It appears to be true at least in this time and place and yes these words are nothing but a facial makeup also known as creativity.

nothing but true, all my life this is a reality… 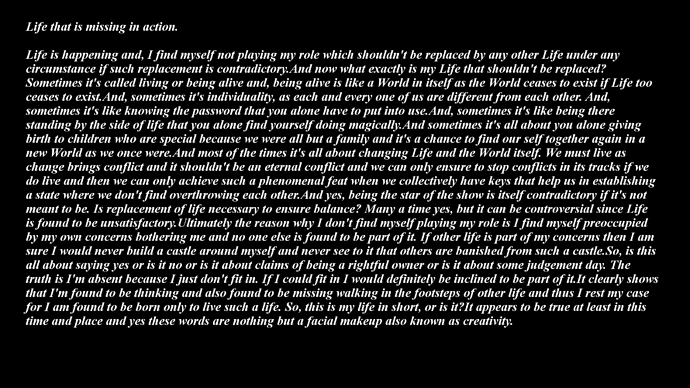