Is it normal to have no money?

I would like to have some money. I would like to have some sense of security. My parents don’t have anything set aside for me—now or in the future. My father makes a decent salary and is working non-stop so I have been targeted by banks when I try to become independent. I’m being pressured to get SSI but I don’t have a car and in the middle of a pandemic so I have absolutely nothing assisting me in finding a job/work. My friends have all ghosted me I guess because I am so pathetic. But I don’t know what else to do than to live with my mom or I would be destitute and homeless. Is that normal? Is having a mental illness a good excuse to keep someone trapped in poverty? I’ve never had more than $1200 in my bank account. That is not normal and I am learning this–its not that I do not want to work nor have lack of skillsets. I just want to succeed or have some security/stability.

You should try to work even if they don’t want. It is your life and a job can improve it and also make the world better.

You’re not on disability? I also live with my parents and brothers.

I’ve been paycheck to paycheck my whole life. I have to save up just to be broke.

No I am not. I have been in the process of applying for SSI through an attorney since September 2019 and so far I finally went in for the physical assessment so I guess that means they processed my mental health assessment. I have had a job at Mcdonalds, Macys warehouse, Grassroots Campaigns in DC, Caretaking, and have attempted to find jobs but now its impossible without a car or any direction. I have 62 credits toward a liberal arts degree in Mass Communications. My dad donated my car to NPR after it got wrecked—and he thinks that if I have a car I will start using drugs—so to them FREEDOM = Relapse. I don’t think I am mentally ill—I think I lack a role model and any sense of life or motivation to succeed.

I guess the short answer is yes.

I have less than £500 in my account and have done for the last couple of years and thats with benefits. Living isnt free and I don’t earn.

I definitely have a feeling of being trapped. Without the help of my parents I would basically be dead because I can’t afford my own housing and food.

Likewise my parents probably won’t leave me anything in terms of money. They’re not high earners and they spend literally everything that comes in.

What’s the longest time you’ve lasted in a job since your 1st psychosis? Me 1 month so I gave up on work.

same–I worked at a warehouse and I kept taking time off but they wouldn’t fire me because I was a temp. worker. I made it past three months it was torture—But I missed a lot of days and called in sick all the time. Maybe I am too hard on myself.

Thats what I feel like–Maybe it was the types of jobs I chose that were so difficult. I always aimed too high so I tend to over-stress and get burnt out.

There’s no shame if you can’t work. I have a physiotherapy degree and can’t work. I am on disability but my parents control my money, it goes directly into their account. I have spending issues which were worse while on Abilify.

I guess its more-so that I don’t know if I can work or what a job would be like. I am perfectly fine in social situations. I am completely normal. I get along with people—and I am friendly. I don’t have anxiety but I can get burnt out easily like ok maybe that’s normal though working from 5pm to 4am at a warehouse packing boxes isn’t exactly fun it was so exhausting and I did not tell anyone I had bipolar or schizophrenia.

I dont want SSI I want job support and I dont have transportation so Im screwed. My parents won’t help me get a job unless its up to their ideals–like I could have either gotten the Pell Grant to return to get an Associates or my dad would pay for ONE CLASS. I can’t function like this—too much control over what I want to do with my life. They would not let me leave the house for months so one day I just up and ran away with a guy I met on twitter because I was so sick of it all.

Honestly, I don’t think MI is a good enough excuse to keep someone poor, but the system is kind of set up that way so it’s really shitty for a lot of people.

I think I hear what you’re saying. My mom hates that I work, even though it’s just a little side housekeeping gig. She tells me to quit all the time and she even tries to come with me to work. There are days she comes with me to the bus stop and sees me off, it’s embarrassing.

Is it normal to have no money? In advanced capitalist societies absolutely. No point in having a dead-end job or taking conventional work ethic seriously.

It’s not normal to have no money. But how long has it been since you were diagnosed with schizophrenia?

After I was diagnosed I was jobless for 3-6 months. I had one temporary stint as an accounts assistant which I took just to put something on my CV.

In that time I was on something called jobseekers, which worked out to be about 200 every month; this i had for about three months.

You are absolutely right to feel trapped. Your parents may not understand just how big of a deal these conditions are and are still adapting. Mine were. They expected me to be able to have a full time job just because my CV from before diagnosis was good for my age.

A year maybe two later, my parents are realising that my health will stop me being able to hold down a full time job typically. Even though my health has massively improved; they are seeing how it really effects me and realising what it can actually do.

I feel for you. It’s not easy finding work without a car. A lot of employment requires travel. However on a positive you can drive, so you do have the skill.

I would say try to make yourself happy. Keep listening to music and using Twitter as you say you have done and you will see things will change. Nothing ever stays the same imo.

My recovery has all been down to three things. Music, twitter and walking. And I was regularly told I was making an incredible recovery.

It can happen for you too. If the SSI thing works out. Just make yourself happy with it. It’s not going to be much, but it should let you go to a coffee shop. or to use a bus to go to interviews.

Put your goal of getting a job and being happy first at all times. You deserve your own sense of identity and security which is not tied up to just what others have to feel and think of you.

Unfortunately when you are trapped financially it becomes even harder to see yourself as your own person with own personality. It robs you of your living. In society where survival is based on money and not self sufficiency. 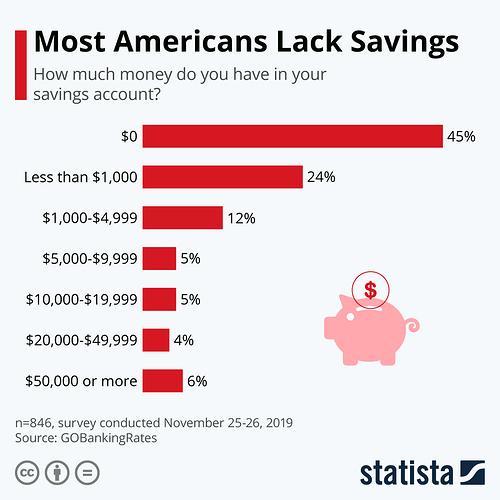 This chart shows how people answered the question, "How much money do you have in your savings account?"

I owe money to my grandma, my pharmacist and my tattoo artist. Lol

and my tattoo artist

Why the heck are you financing a tattoo?!?

The current ruling class have designed it so that 90% live with little to no money while the ruling class top rich aholes get to drink mimosas on private jets and yachts. There’s a reason so many struggle with money, it was designed that way