I'm happy for him but I'm sad

So my brother was just tagged in a Xmas 2019 and he looks so happy with ALL his friends. I honestly have no idea how they have so many friends and I have like two. It makes me feel like such a loser. I mean I’m happy he’s enjoying himself and they have their own lives, but a part of me wishes I could have a big group of friends like that. The reason I only have two is because they’re the only ones that accept me for me. Don’t get me wrong I’ve tried to make friends, but like I’ve been told, I have a strange way of acting. I have made the effort to keep friends, but the ones I had always wanted to start drama. Ugh! I must have LOSER written on my forehead.

I know it’s not the quantity but the quality. Still makes me feel self conscious.
Some people have families, and some people make their friends their families.

Facebook is just a highlight reel. Life is pretty mundane like the vast majority of the time, even for celebrities. Even for billionaires.

Everyone does the same basic ■■■■ like travelling from point A to B, eating, pooping, sleeping, watching TV … It’s not like everyone else is living some super-fulfilled magical life.

Yeah, I’ve been spending too much time on there. I kind of got into the same habits my mom is in. She’s addicted to Facebook. I always get on to her for posting everything, but No more of that for me. I gotta get off. It’s messing with my perception.

What’s “tagged”?
I would like a small circle of friends but having just one friend to do stuff with is fine with me. I like a little drama sometimes, lol.

I would be up for drama if it helped build my relationship with that person. But women round here are catty “drama”. My two buds I have like talking about Alaska, the weather, theories, death, nature, animals, there for you in many ways. My old “frenimies” were just fake people that tore each other down just to watch your world crumble types. Eeee, glad that’s over.

Personally, being an addict was full of drama, most of it wasn’t fun at the time and it only felt a little adventurous. Looking back I see the drama and now I marvel at the crap that I went through. But now I can “stop and smell the roses” and enjoy or marvel at the drama I go through now while it’s happening. A lot of it ain’t funny though.

Did you know Facebook has a memorial option now, for deceased members? Kinda frightening.

Dont worry about it too much @Cici2, like @naturallycured said, it’s just a ‘highlight reel’.

I have a lot of good friends and I’m not a bad person. Even saying. I’d take one good friend who understands me and my struggles over a million.

Take stock…One decent friend who accepts you for you is more priceless than a 20k mastercard. It really is. 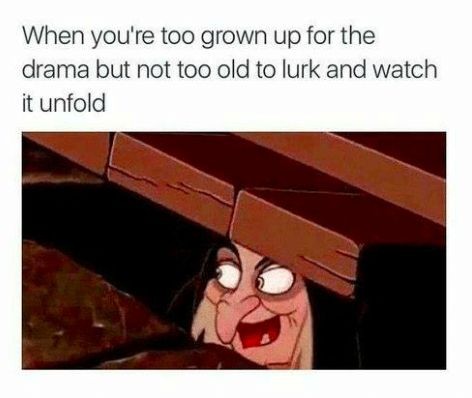 I’m not too grown up for the drama. As long as I don’t overdo it and I’m back home every night at 6:00 pm for my Geritol.

I dont know, I recently talked to 2 of my best friends from high school that I haven’t talked to in a decade. I found them on Facebook.

Both are married, one already has 2 kids and the other one married a really hot russian woman and just had his first child.

I’m happy for both of them, but mainly I’m happy for myself because we were very good friends and just kinda fell apart and I got some closure from it.

Try to be happy for your brother, dont competitively compare yourself to your siblings, it’s not healthy.

Yeah… I’ve never been one to envy others. Don’t want to let these feelings bother me anymore.

Are you close with your brother ? If not, kinda makes sense why you envy him.

I actually know exactly how you feel @Cici2 2019 really sucked for me. I legit lost all my friends. I honestly have no one. Not even one, I was having an episode Thursday and I realized when I looked at my phone that I literally had no one I could call. I hate the holidays because when I get with my family it’s just a reminder of what I’m not! Which is a successful normal person according to them.

He’s been distant ever since he met his wife. The last girlfriend he had was a really sweet person, but this woman is kind of a ■■■■■ and has been passive aggressive with me since we met. She is so damn judgemental too, but hates when you correct her. She ghosted my aunt for giving her some advice. She also cut off her grandma for having a “weird” husband. I was like, if she did that to him, what is she gonna do to me?

One thing I don’t envy about him is his attitude. He’s very rude, loud and in your face. He thinks being the Loudest makes him right. They both have this weird thing against being white and their obsession with having black friends is in itself a little racist, which they claim they aren’t, but then make fun of people for being “pale”. Like really, you’re fighting racism with racism?

Before you stem this off into other places, just know that he’s your brother and will always love you, even if he doesnt show it.

Yeah, it sucks when you just need someone to talk to and have a little company, no one is around. I hate that feeling.

Everyone tells me that and it’s hard at times to see it, because he’s never the one to call me. I guess I’ve always been there to call and check if he’s doing ok. Maybe I’m still trying to protect him, he’s my little brother, like I used to when we were little. I wasn’t always the nicest sister, so that may be a factor as to why I feel like we should do more. But he does have a family and they come first, like mine do.