I’d find it awfully suspiscious these clean cut folks, driving around, with pro police bumper stickers. trying to get out of a ticket much? haha

those people are obviously amateurs as any seasoned pro will tell you, there is no talking your way out of it. you do the crime, you do the time, haha.

im on to these people! give you 10 years to think about it haha.

One time I sped through a stop light while eating ice cream and got pulled over. I just literally didn’t see the light but I was paying attention. I’m not a good driver. Anyway, I became so hysterical that he let me off with a warning. Lol its the only time I’ve ever been pulled over.

If I were a cop I would date another cop. Love a man in uniform.

They look for some things I think… I met a talkative guy at a bar once who said he clipped a pedestrian and drove away.

He got leniency because the surrounding store cameras saw he never once tapped his break lights meaning he was oblivious and thus ‘more’ innocent than someone who ‘mulls it over a second or two’.

Edit: there were still a lot of consequences.

I have three family members who were police officers, well, two are retired and the other is the sheriff of my county. One of the retired ones is an alcoholic and is slowly losing everything he has. The other seems happily retired but he’s told me stories about his job and I am super glad I never went into that profession. I support cops and have three speeding tickets out of my wallet but I eventually learned.

I’d be fired for not meeting quotas. I’d let people off. There’s too much bs already.

I had a few speeding tickets like 20 years ago when I was young and new on the road and impatient to get places. Nothing outrageous, like 10 or 15 over the limit.

I’ve also had the cops come pick me up and bring me to the hospital. I’ve always been nice and respectful when dealing with them and they have treated me kindly, never had a bad incidence with them. When they came to take me to the hospital the cop actually apologized for having to put me in handcuffs but said he had to do it.

I got out of seven tickets when I was caught red handed. 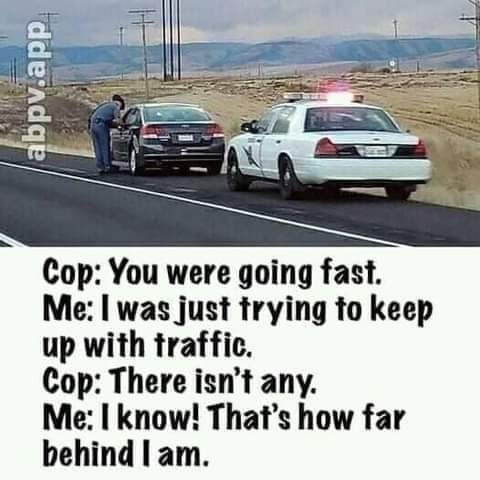 I recently ‘fell off the wagon’ and fell flat on my face in the parking lot of a saloon. The cop saw the whole thing.

He came up to me and said ‘you’re hurt pretty bad’. (As I lay there trying to basically get up)…

I guess it helped that I addressed him as ‘friend’… (?)

But He helped me up (did the one knee thing) , accepted an expired license (that I hold onto for no good reason), and very interesting part: is asked me if my car was there…

To which I said:

‘Nah I ubered it…’ and his remark back was ‘Even better’ ‘means you don’t have to come back for it in the morning.’

He asked what was bothering me, and knew I needed an ambulance… and got me a local volunteer one…

[A cops daughter once showed me a serious grace… ]. Guess I’m just a sucker for ‘Recency’ (I.e Persuaded by the last instance/experience?

But nah it’s ‘more than meets the eye…’ with them. Racial bias(!) is akin (to me) much more to a phenomena and as sz we must think on the topic carefully…

I would never be a cop. I’m not going to deliver babies on the side of a highway, direct traffic, catch women and babies jumping from their burning apartments, enforcing traffic laws, respond to car accidents, rescue people who drive into lakes, go to domestic violence calls to stop a guy from beating the shitt out of his girlfriend, go to shots-fired calls to stop a guy who’s shooting people in a Walmart, talking people out of suicide–all while running into bad guys who wouldn’t think twice about shooting me in the head.

You couldn’t pay me enough to be a cop.

You might not be able to talk your way out of a ticket, but if you show respect and don’t give the cop a hard time there is a good chance he will lessen the amount of the ticket. I’ve seen it happen. A lot of the time a cop has options on what he can hit you with when he pulls you over.

You can definitely get out of a ticket.

I have gotten out of three tickets. One was when I ran a stop sign and cut off a policeman. He just said be more careful. His partner was smiling when I did it.

I had a friend who was a cop for a major city. I did three or four ride-alongs with him. Had to wear this corny reflective vest that said “Volunteer Observer.” Whatever. He drove like a maniac when he hit the lights. On one ride-along, there was a shots fired call from a bar, and I thought he was going to kill us both getting there. It’s a busy city, and I’m no pansy in the car - but I thought any second now we’re going to be in a wreck. All for naught. Like 10 units responded, and no one at the bar knew anything, so after much milling around and navel-gazing, they all left without incident.

He also made a mistake running someone’s license plate. The wrong number that he ran came back stolen, so he felony stopped the car. Driver about shitt a brick. Even once the error was clarified, the citizen was still a wreck. Guess he never had an M-4 pointed at him before. Guy said he was an accountant (was driving a nice Mercedes), and probably went home shaking. Dumb mistake on my friend’s part.

I’d never be a cop. Several ride-alongs were enough. The stupid, mind-numbingly human equivalents of above-ground pools he dealt with were enough to dissuade me. Junkies, violent drunks, prank 911 hangup calls, false store alarms, and just the general scummy people he was around for 10 hours convinced me to not bother. He pointed out (and I began to notice), that ALL the calls were in the same 4X3 mile road area. The rest of the city? Not a peep.

I’d find it awfully suspiscious these clean cut folks, driving around, with pro police bumper stickers. trying to get out of a ticket much?

I don’t need to get out of tickets, haven’t had one for 36 years. It’s called driving responsibly.