Would it be cool or would it be hell? People would probably worship you as a genius and leader.

The civilization would probably advance at a much slower rate.

People would probably worship you as a genius and leader.

No, they would stone you out of jealousy and fear. In Cambodia at one time, the ruling class killed every intellectual who wasn’t literally a brainwashed member of their party. They even killed some people for wearing glasses because it indicated literacy.

Yeah, I guess they did almost kill him. But, it wasn’t out of jealousy and fear. It was because of disruptive innovation (symbolically) that disrupted their economy, but would have saved their lives long term.

I’m above average. I’m out-numbered by average and below average. The frustration is something else.

I think I would get bored ordering people around to open doors.

Based on the IQ tests I have done, the fact that I graduated high school with an A average and was accepted into Canada’s top university for a Science program, I’m in the top 2-3% in the world in terms of intelligence.

Talking to almost everyone is an exercise in futility. I have one friend in real life that is very intelligent. I know more about some things and he knows more about others, and we learn from eachother. But we can keep up with eachother talking about anything.

Everyone else tells me I’m smart but doesn’t understand what I’m talking about.

However I’ve learned to small talk and drop down and relate to dumb people in a way they understand most of the time.

I’m an introvert and I prefer solitude, reading and thinking about things I find interesting.

Low IQ people tend to fear what they do not understand, and are not curious or Interested in learning more, and hate or feel threatened by intelligent people that blow apart their belief systems.

Living in a world of people with an IQ of 50 I think I would try to take over because living under the rule of those people would be awful. Or move far away from everyone and live in solitude, just act dumb like they are when I’m around them so they don’t feel threatened by me and kill me. 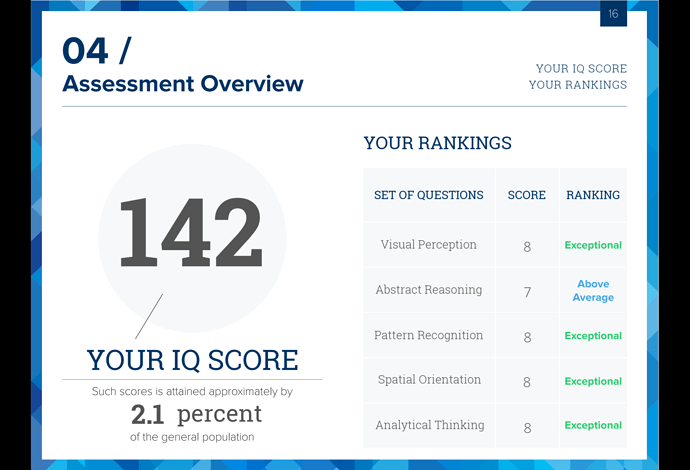 I’m in the top 2-3% in the world in terms of intelligence.

Talking to almost everyone is an exercise in futility.

You could try joining Mensa. Supposedly the top 2% can join. Some of the online communities can’t touch this place for quality, but some local in-person meetings can be ok.

@Headspark did you find school boring? Often very smart people find it boring. I found it extremely boring, I was almost never in class. I don’t know my IQ but I believe it’s (or was, before medication and sz) far above average. I’m smart enough to know that I’m smart, I guess.

Do you feel like medication affects your intelligence? It does so for me, a lot. I’m probably more average IQ-wise now after medication. Probably still a bit above average though, I would believe. I feel like my medication makes deep thinking hard, and it slows down the speed of thinking.

As is common with ASD,though not universal, significant adaptive functioning < IQ

“In the land of the blind men, the one eyed man is king.”

Or as I like to say, “In the land of the schizophrenics, the brain damaged man is king.”

I found certain subjects boring but I loved others. Like when they taught us Shakespeare in English class.booooooring. But learning about the periodic table of elements in Chemistry class and how there are patterns in it, how the elements fit together…fascinating. Accounting, balancing debts and credits, tedious. But I loved micro and macro economics, learning how the global economic system worked, everyday I look forward to going to class. Depended on the subject really.

No, that IQ test I posted was from 2019 I believe, so only a few years old. At the time I was on both Lurasidone and Olanzapine. My cognition was never affected by schizophrenia or any of the meds I have tried. My memory isn’t quite as good as it was when I was younger, but I’m 44 now.

When I was at school we did a lot of ‘colour in the danger’ worksheets. Never did any qualifications. I think you’ll find somebody with an IQ of 50 wouldnt be able to live indepenenely at all, They would have on average a mental age of a 7 year old.

What do you mean “if”
Just kidding. I’m not a genius or anything, not even close, but I find myself being shocked regularly at how not-smart a lot of people are out there. And I think it’s getting worse as education continues to fail the general population.

Genius, the high end of creativity, explained and defined by Paul Cooijmans.

I would help others increase their IQ lol

A civilization won’t exist with IQ of 50.

The people would think you have superpowers, maybe some religious fcks demonise you. No, you wouldn’t get old.