Been watching ‘Pulling with My Pare’ and its pretty funny but I got a bit upset when the guy was struggling and had to stop the episode 38 mins a long,

It reminded me when I went to castle with my mum and there was this really beautiful well spoken tour guide and I think my mum was trying to set me up with her lol,

just thinking that it would be really nice if my Mum could set me up with a nice Lady like that bc i have no chance.

I managed to press play on the last bit of the episode and it wasn’t as bad as I thought,

I think i would fall apart bc i have problems and women dont want guys with problems ino.

If you are relying on your mom to get you a date it might not happen.

But I’ve read some comments from you about women that were very sexist.

You need to work on that before you go seeking a date.

you dont know me and i’m actually very nice to women, have had no complaints

Mom has never tried to set me up with a woman. I wouldn’t accept it anyway. She did mention a classmate of mine once upon a time, who was indeed pretty but not exactly my type. She has never expressed doubts regarding my romantic choices either. She behaved naturally with all the women I introduced to her.

I couldn’t meet most women’s demands nowadays. I’m too ill. I can hold down a part-time job and I do a little bit of extra stuff on the side, such as reading or shopping for groceries, but that’s it. Hygiene-wise, I do the bare minimum, and my physical shape is going down fast. In bed I’d probably be a major letdown, and my overall lack of drive and enthusiasm can’t possibly attract the kind of women I’d like to be together with.

TLDR: your mom might mean well, but a woman won’t be seduced by a mother’s sweet words about her own son.

Being nice to women and being sexist are two different things.

You said women didn’t like men with problems and I was just correcting that.

your mom might mean well, but a woman won’t be seduced by a mother’s sweet words about her own son.

I know, it wasn’t like that, I think she was just hoping bc she wants me to give her a grand child (probably a daughter) lol

you dont know me and i’m actually very nice to women, have had no complaints

I’m not sexist, there are always going to be differences between men and women and that is a fact, just bc I don’t like women beating each other up on live fights on tv or running into battle doesn’t make me sexist, I actually really care about women and I don’t want them to get hurt or be put in any danger, people got to accept that sometimes someone will have different views.

Well, I did try to give you the benefit of the doubt and tell them not to make fun.

You just messed that up, because that entire reply is sexist. You proved their point.

Different views are fine, sexism is not. You still haven’t learned the difference

I don’t think its sexist when i am talking about protecting women,

It’s sexist to assume that women want your protection.

call me what you like but i’m not going to stop caring about women.

You just refuse to wrap your head around the fact that women do not need nor want your idea of protection. It’s 2022 not 1922.

I don’t see what is wrong with a man being protective, some women are vulnerable and need someone to take care of them but I know other people who think differently but I don’t see any reason for hate.

You have to accept that most women are not physically as strong, I know some small guys and some bigger women though and I know women who work out a lot but at their peak most men will outperform a Lady, that is why we have male and female teams in a lot of sports.

There is no woman out there who NEEDS a man to take care of them. You have a very archaic viewpoint of a man and a woman’s role. Tbh, I want to flag what you just said, because it’s offensive towards women. But that is a personal opinion of mine.

I don’t know what your point is regarding strength, unless your saying women can’t do some jobs. My 11 year old daughter knows how to weld and change the oil in our car. I couldn’t be more proud of her. Again, your view of women is very old fashioned.

this is off topic anyway

I honestly don’t see why you guys are getting upset, its not a big deal, 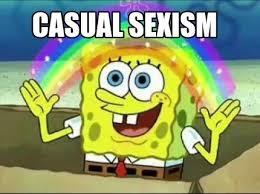