It still needs the back brakes attached, the gear shifter and the basket assembled and attached. It really was quite a pain in the ass to assemble. He plans on using it to take our dog for walks/runs…which I personally think is a bad idea. 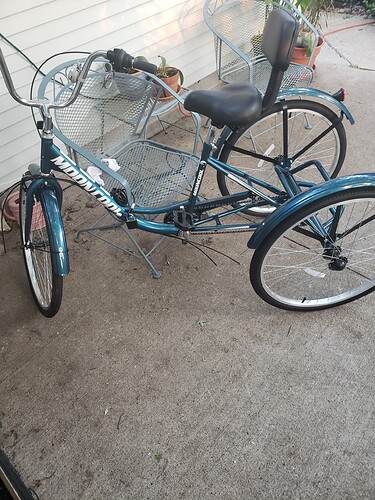 That is one nice machine.

Nice! I put one like that together 2 summers ago for my disabled daughter. Hers is a Schwinn.

which I personally think is a bad idea.

Yeah dude. I didn’t want to say anything on your first post cuz it seemed like an unlikely thing to happen.

But you can not drag a dog with a bicycle. The bicycle (trike) has mechanical advantage. And your dog is fat and looks out of shape. I’m sorry but you’ve posted pics of him and I don’t want anything to happen to him

Dogs need to be WALKED, not dragged by a bicycle.

That’s a sweet looking bike!! I would love to have a set of wheels like that.

What I worry about most is him getting distracted controlling the bike and let loose of her the leash to her harness or her getting under the tires or her leash getting all tangled up on the bike from her going back and forth and round and round and whatnot. I just don’t see it as being a very successful endeavor and I hope she doesn’t get loose or something.

Yeah dude. I’m honestly not comfortable with it either.

My friend bought a special bar that sticks out the side and you clip the dog to it so the dog can’t run around. It works really well. Not sure if it would attach to a trike, though.

I tried taking my dog with a leash and wrecked.

And your dog is fat and looks out of shape.

For some reason, @Bowens dog has brought on the ire of a couple members here.

For what it’s worth, I think she’s adorable and looks like a well-cared-for member of the family.

You are not supposed to cycle with a dog attached to the rider/cycle.

This is a thing

I rather be a dixk than something happens to the dog

Haha, it’s ok. She does need to lose some weight. We feed her too much human food. We have actually been trying to trim her up. Thanks though @Schztuna

No, I hear you on the cycling thing, and agree.

Just didn’t really think you needed to go full blast on a dog’s weight is all.

I guess what I’m trying to say is that there’s
A nicer way of getting one’s point across.

But to each their own.

The dog won’t be able to keep up was my point.

It was nice of you to help your dad.

Dogs definitely have their own fitness levels, just like humans do.

Either way, I agree with you on the whole “don’t cycle with a dog” thing.

The leash, the wheels, the pup… Too many variables that could cause it to go awry.

I agree with both of you. I think it’s a bad idea. But I have expressed my concerns to my dad and he is determined to try it anyway. I think most likely what will happen is it will be a big fiasco and he will give up on it. It was the whole reason he got a 3 wheel bike…so she couldn’t pull him over so that will probably be a waste of money too. IDK. We will see.

I’ve seen people riding their bikes in my neighborhood with their dog on a leash. It’s a pretty lame idea for several reasons. One, unless there are good bike paths, you’re likely riding on the street which puts the dog at risk of being hit by a car. Two, the dog can get tangled with the bike injuring both the dog and the rider. Three, the rider may drop the leash and the dog runs away and may get hit by a car. Four, the bike can run over the dog. And so on… Plus, I suspect it is far from enjoyable for the dog.

unless there are good bike paths, you’re likely riding on the street which puts the dog at risk of being hit by a car.

My dad said he is going to take her to the local fairgrounds to try it so they won’t be on the street.

The rest of your post I completely agree with. I think it’s risky. My dad has MS and I sometimes wonder if it isn’t hindering his thought processes in this area and is making him not fully understand the risks involved. But what can i do? I’m in his house and the dog is just as much his as mine. So I dunno. I think I just have to keep my fingers crossed. I’ll try to go with him when he goes to try to be there if she gets loose or something.