How healthy is your diet? Any food ideas?

I’m on a calorie controlled diet and have been losing weight. However my food choices are pretty poor. Lots of microwave ready meals etc.

Just wondering if anybody has any food ideas for people who have difficulties cooking from scratch?

MY diet is what ever is on sale, Not much of a cook and a lazy eater. Couple of times I have jumped on the healthy eating band wagon, but it did not last long for me.

Slow cooker meals are pretty easy. If you google healthy low calorie slow cooker meals or one-pot meals if you don’t have a slow cooker. You just throw a bunch of things in and let it simmer for 6-8 hours and voila its done.http://greatist.com/health/59-healthy-one-pot-meals https://www.bustle.com/articles/135907-15-easy-crock-pot-recipes-that-are-too-simple-to-mess-up

I like making vegetable curry. It’s super easy. Just throw some frozen or fresh veggies in a pot with 1c water, a vegetable bullion cube, and a can of coconut milk. Then add a ton of curry powder, some ginger, and a dash of cayenne pepper and let it boil, then simmer, stirring occasionally, until the veggies are done. They should be soft, but still have a bit of crunch to them. It takes me about fifteen minutes. I serve it over rice, but you could easily substitute quinoa or some other grain that is lower calorie.

You can get 3 heads if romain lettuce for 3$ pre-washed. Each one us enough for one meal. I like to add peelef English cucumber and radishes. Both are pretty cheap per serving. Use a low carb tomato vingrette. Very yummy.

But more savory try @skims advice for crockpots. I like making stock in the crockpot. Bake a chicken at 350 for 75 minutes. Debone after cooled. Put bones and carrots, onion and celery and cook on low overnight. Strain and freeze in two cup portions.

Also anything low carb. Bake a pork chop with seasoning and a bit of Panko serve with veg.

same here, my diet is as healthy as the weekly specials. going outside to the store is a struggle enough, because of my paranoid sz making me think that I’m going to be accused of shoplifting.

I eat cereal only to lose weight

my diet is a mix of cereal and canned meat. I can’t live without meat, and cereal is like dessert.

Do you also take a multivitamin so you don’t get malnourished?

Lite n easy .
Been four weeks I think n im loving it.
I get 1500 cal lunch n breakfast.
So thoughtful they include daily fruit n snacks.
I could eat cheaper but it’s been darling to have this right now.
Love cooking for someone but I’m on me own now.

For a treat you could steam artichokes…they are served with melted lemon butter though, so maybe not.

Yes I do. Thanks for asking, that is important to point out.
I take a multivitamin, vitamin D, and fish oil omega 3 fatty acid

And I straight up chew up bottles of antipsychotic meds

Just kidding never do that…that was a joke

Ditto for me. I’ve been eating from the freezer in the Dollar Tree, but lately I’ve been finding some pretty good frozen treats at Wal Mart. I eat a lot of processed meat. I drink a fair amount of fruit juice and vegetable juice, but no actual vegetables, other than the frozen mixed vegetables you can get at Wal Mart or in the Dollar Tree. I heat those up in the microwave, then put either Parmesean cheese, ranch dressing, or bar b que sauce on them.

I like wraps with grilled chicken. Just packed tortillas, toss some chicken, hot sauce, leaf greens, cucumber, tomato, onion, cheese, wrap around, grill on grilling pan for a while.

Like kale salad, roasted chicken, with corn and coleslaw, and broiled salmon. A diet high in lean protein and vegetables.

I think low fat cheese sticks, red delicious apples and hard boiled eggs really help curb my appetite. I do now find that if I try to walk/work off 500 calories a day as much as possible I tend to make better food choices but I had to build up to it slowly with burning about 300 cals/day for a long time. I also am finding that when someone ends up in a hospital in my close family I end up getting a lot of steps that week.

In the summary they sum up the secret to longevity as ‘Go vegetarian’.

This is our all time favorite recipe. Its pretty easy, but kind of time consuming to make. So delicious, lots of fiber. We don’t put the cilantro in because its weird. 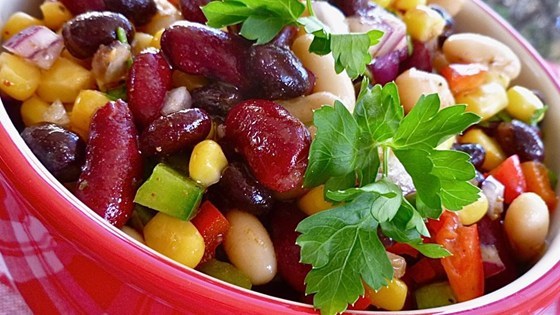