How do you tell the difference-adult tantrum v meltdown?

At one point when faced by negative/stressful stimuli my anxiety would ramp up, I would become emotionally volatile, verbally very heated, and increasingly irrational and paranoid.
It was not behaviour I did with the expectation of getting anything but more a reflex reaction.

I think my pdocs/other mental health staff thought it was me having a tantrum and being manipulative but as indicated above there was nothing purposeful or planned about it all.

Since being on risperdal injections I’ve been a lot less emotionally reactive and the episodes mentioned above have virtually ceased.

Just like you pointed out, adult tantrum is with expected pay outs, meltdowns are more an overwhelming reaction.
Tantrum are easily snuffed out by simply not getting excited and walking away.
Meltdowns need time to cool and some support after.

Just my take on these.

After the emotional damn had burst I would feel very drained . As you say something comes over you rather than when you are in the midst of it you are deliberately behaving like that.

The psychiatric systems failure to treat me as a whole person and see beyond the textbook psychiatric symptoms only served to aggravate things. As did attempts to get more help and support seeing me dismissed as awkward, demanding and troublesome.

Now in terms of the whole person support I need services are just as shitty and useless. The difference is most of the time I deflect questions as to how I am with a blasé response such as “so so” or “not too bad” . I no longer argue the toss with them. Occasionally I’ll bring something up to be met with a deafening silence. I don’t press the point for fear of being hit with the abusive treatment of the past.

Think if I were treated that poorly I’d blow like an active volcano.
I can only take to much myself, especially if no one will listen in the first place.
Preexisting negative labels only serve to do more harm than help anyone.

especially if no one will listen in the first place.

That’s one of my main criticisms of pdocs and other mental health workers; too many unable to see that asking, listening and learning should come way before rushing to judgement.

Truer words never spoken.
You are so right about that.
Many times I’ve just stayed quiet when I really wanted to knock their block off, or just walk out on them.
Found walking out only makes them angrier, so they call the police to show up at my house and cause a scene. 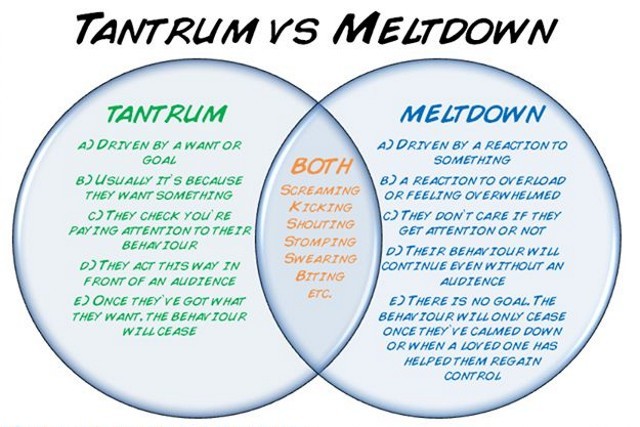 Looking at that - a) a reaction to lack of understanding b) when feeling acutely stressed c) In full rant mode and need to express feelings -no consideration of how much attention is being paid d) Often no audience due to seeing a solitary staff member e)No conscious goal . Very much a knee jerk emotional reaction and overwhelming need to sound off.
Like that until the emotional storm breaks.

Well with my little sisters we tend to see it as a tantrum if they are throwing a fit when they don’t get their way. We see it as a meltdown if they throw a fit over something small or random, and we also know they are very tired or have had a long day or are sick, etc

I know services have put things down to anger outbursts. Apparently you are supposed to react to abusive and poor treatment with a smile on your face. A lot of it shows how lacking in intelligence and understanding a lot of mental health professionals are.

I babysat for many,many years, with a wide variety of ages, 2 months> 16 years, and adults aren’t that much different than children if they can get away with it. With meltdowns, it’s a pure emotional reaction to having needs go unmet.

@firemonkey, your reaction to being treated unfairly for so long is quite normal, and very understandable.

I’ve been in the same situation where no matter what I said, no one would actually listen, they’d just figure my problem wasn’t real, and instead of actually looking into the possibility it was real, they’d just dismiss everything I said as “delusional” and throw me in the hospital with a new Rx on the way out.

I’d get the same treatment at home, and eventually I’d get so frustrated that I took my aggressions out on my room and broke everything I could get my hands on.
Solved nothing, and I was left with a pile of garbage to clean up, but damn, I couldn’t get anyone to listen.

It’s been 20 years now, and only now after everything has changed, is one person who had been there the whole time, starting to listen.

You know what she tells me after I tell that same broken record story again and again?

! Excuse me while I go trash another glass punch bowl set on the hallway floor.