I live in a fairly safe neighborhood. There are virtually no reports of crime and no sex offenders in my neighborhood. At least not ones that have been caught.

A few weeks ago a big guy came to the door and tried to come in my house. My wife has the door locked and wouldn’t open it. He asked if we had ordered a new trash can. We didn’t. He wasn’t from the city. I called them. They sent no one to the house.

So today I went and bought this doorbell thing from Costco. I mounted it under the regular doorbell and it notifies our phones if there is movement or if someone rings it. It has video and sound. You can talk to and hear anyone at the door even if you aren’t home. It was on sale for $129. I didn’t have much money so I put it on my credit card. If this guy comes back we will have him on video. It’s battery operated though so you have to charge it occasionally. I don’t know how much yet.

I also bought the wife two BB guns that look like real guns. I think that was a mistake but the wife wanted them. Our house is full of windows so anyone at the door can see inside.

I had cox homelfe with an alarm and a webcam but it was too expensive and I cancelled it. I still have the sign out front though. That obviously didn’t deter this guy.

Scary stuff. Thank god your wife didn’t open the door. The one time I lived alone, for a few months in my twenties this guy came to the door and I asked who it was he said that Jesus sent him to save me. He said he was from the local church. I didn’t dare open the door. They’ll say anything to get in. I’mm glad you got the doorbell.

We have two big dogs too but my wife makes me take them to camp while I am at work. If my dogs would have been here I don’t think he would have tried it.

But I bought this doormat too. I have to blow the leaves off the patio but then I am going to put it outside. 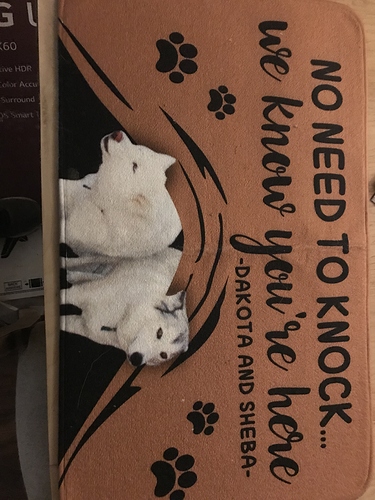 We got Ring right after someone broke in our house. Make sure you charge it regularly. We made ours more sensitive so it’ll pick up movement anywhere near the door.

I have the Ring 2. How often do you have to charge it?

I also bought the wife two BB guns that look like real guns. I think that was a mistake but the wife wanted them.

I would say you might as well have bought the real things, if they look that real it will work as a deterrent for SOME of the cases. For the rest, well let’s just say a BB gun won’t quite cut it. If you don’t have enough money or can’t buy a gun, just know that a flare gun is an option.

I got 3 camera’s outside, they are wired and i can watch while laying in bed. had them for years now and can see who’s at the door if someone knocks. No one visits me so I never answer the door anyway

I don’t trust the wife or me with a gun. She has already shot me with the BB gun.

But I told her she can’t stop anybody with a BB gun. She says it looks real and will scare them away. I don’t know.

I certainly wouldn’t trust her with a flare gun. She will burn the house down. I am most comfortable with a Barreta M9 as that’s what I carried in the Marines and already know how to shoot it and do maintenance with it. I still get suicidal occasionally and a gun is too easy. I wouldn’t want to know where it was.

She has already shot me with the BB gun.

I doubt you deserved it, either way I think you are probably best then stopping at BB guns if you don’t think you can both be trusted.

She said it was an accident and if I wouldn’t have reached for my drink it wouldn’t have hit me. I didn’t think she was going to shoot it in the house. But yes. I think she just straight up shot me.

She swears on our sons life she didn’t mean to hit me with it. It just put a mark on my arm. Didn’t really hurt.

I have had “BB gun wars” as a kid, really stupid to do, we didn’t have safety glasses or anything. BB guns are still dangerous if they have enough force applied to the BB.

Airsoft sting pretty good as well. I got shot by those by some unsavory folk in highschool, not too pleasant.

We used to have wars when kids as well. One guy was using a pump up pellet gun and shot my friend in the knee and the pellet got lodged under the skin on top of his knee. He was crying and went to the hospital. I was just using a sling shot not a gun. If we would have hit someone in the eye it would have been bad.

Boys will be boys. My son and his friends used to have airsoft wars around the house. I never got involved. I was dumber than that.

We have a ring doorbell which got camera etc

In Scotland you need a fire arms licence to own an air rifle (what we call a BB gun in the U.K.).

I got her two pistols. They aren’t air rifles. 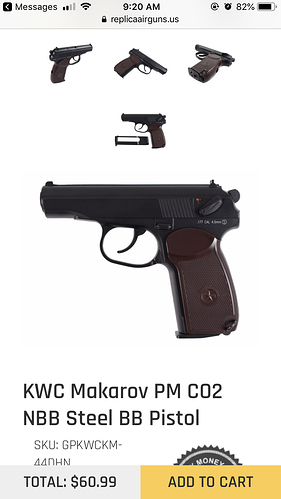 They use CO2 cartridges.

I keep a bowie knife taped above the front door - its more of a paranoia thing really - cos they would have to get thru the communal front door first - but it makes me feel safer. Someone said i could be done for having an offensive weapon - but its in my property so i dont care.

We charge ours every other day or it runs out. I think that the battery may not be good, but I just wanted to warn you in case they’re all like that. I think ours lasts 3 days and nights without recharging.