High on fat, low on evidence: the problem with the keto diet 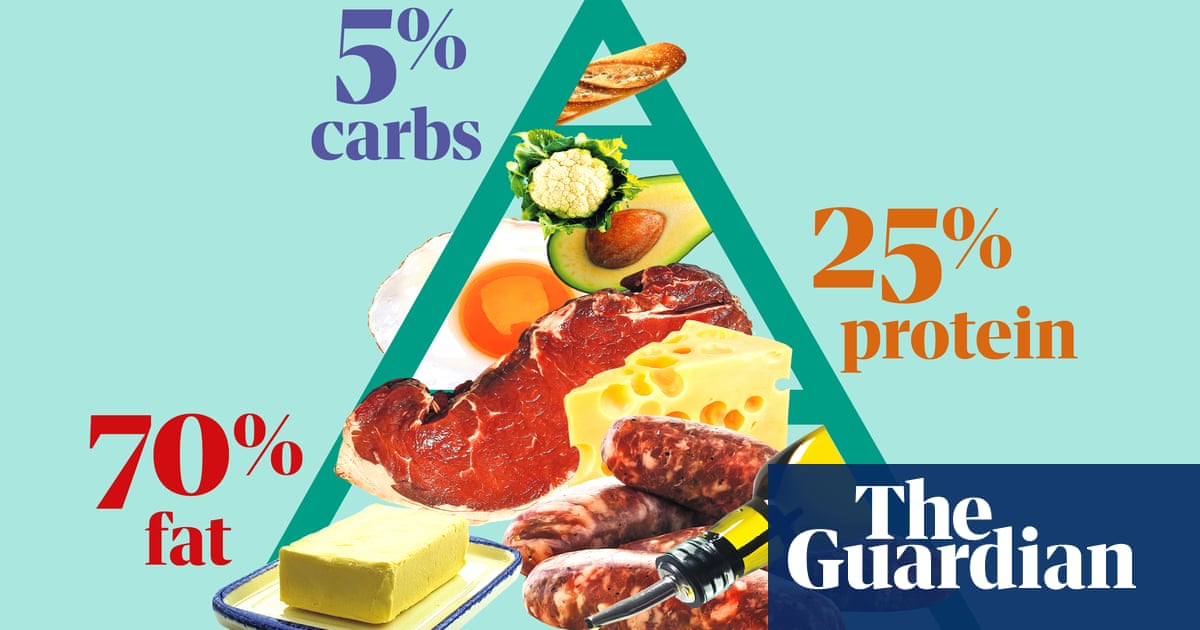 High on fat, low on evidence: the problem with the keto diet

The ultra-low-carb ketogenic diet – which forces the body to burn fat – flies in the face of conventional nutritional advice. It is hugely popular, but is it healthy or sustainable?

I’ve heard bad things about some of the important organs regarding the keto diet. Maybe just not for everyone. Cos it stresses some organs out that diet. At least in some people apparently.

I’ve had good results on it. I eat a lot more vegetables (dark green ones mostly) than most people on the keto diet do, and I don’t go out of my way to load up on fat just for the purpose of eating fat. Most of my ingested fat comes from eating salmon and from eating avocados. I don’t eat grains at all (except I cheat during major holidays or on one monthly cheat day). Same thing with sugar and anything starchy.

I also do intermittent fasting (One Meal A Day) and every two weeks I do a dry fast for 2 to 3 days. It frees up a huge amount of time because I am not always spending time cooking cleaning and looking for food to eat. I get a lot more done than ever before.

But yeah, I’m back into my high school clothes, I exercise and lift weights and feel great, and my A1c is back to the 4s again.

If I compare the way I am now to the way I was when I had gained weight from Geodon, I would say I am much healthier now than I was back then.

I’m not a fan of the keto diet, they encourage you to eat high fat / high protein foods that are known to cause cancer and heart disease on the regular.

Dr. McDougall’s high-carb diet, which advocates eating plant-only foods (mostly starches) that are 80% carbs, 10% fat, 10% protein, still causes a person to lose weight healthily, and you can eat until full all the time since the foods are not very calorically dense. I’m not talking about loading up on green veggies, even though they make you hungry not even an hour later, you can eat potatoes and bread with this without worry, due to how carbohydrates alone won’t make you gain much weight (only about 1.4% of it is converted to fat via “de novo lipogenesis”, which is an expensive process that consumes 30% of the calories converted.) The fat you eat however will turn to body fat easily though, so the diet advocates cutting out as much fat as possible.

The book “The Starch Solution” talks about that diet, and how you can lose weight effortlessly (half a pound a day is normal with it,) while lowering your blood sugar and cholesterol counts dramatically. It even puts type 2 diabetes in remission.

I’ve lost 8 pounds on it effortlessly in 2 weeks so far, without exercising much (maybe 15 mins of treadmill every two days. I should do more.)

I’m iffy about the diet and scientists and these studies. We still don’t know ■■■■ yet.

The news, scientists, and doctors lie, are biased, and the list goes on. They’re still ignorant in many ways. Who is benefiting/profiteering?

My mom and a few others do keto and it works. Doctors have recommended it too for them. They lost a lot of weight. But more importantly they feel better. Their inflammation and pain is down and it comes back after eating sugar and carbs.
Of course, they take extra vitamins and supplements. It’s a very hard diet to follow.

Some schizophrenics benefit. I heard there’s evidence some epileptics benefit. Jordon Peterson’s daughter follows the all meat diet and has greatly benefited. She suffers from pain and depression.

For years, they said milk was good for you. Now, they say it is bad. They said smoking wasn’t bad, now it kills you.

I could go on but rather not.

There are so many fads out there. You don’t know what to do. So I say just eat in moderation and watch your calorie intake.

I’m not a fan of the keto diet, they encourage you to eat high fat / high protein foods that are known to cause cancer and heart disease on the regular.

Some of them are quite extreme and gratuitously add fat and protein where it is not necessary. I don’t do that. I mainly cut out sugar, grains, and starchy carbs (potatoes, etc.). I still get some (not a lot) carbs from things like vegetables and the occasional fruit.

As for cancer, it loves sugars and starches. And some plant foods that are roasted (like coffee) or are toasted (like bread) or cooked at high heat until browned (like potatoes) can be carcinogenic because they form acetaldehydes and acrylamides.

The original keto diet was mainly about reducing carbs to the point where your body switches to running on ketones. Some people took it too far and got carried away with it, and will probably have some health problems from it.

It’s true that sugar feeds cancer, but so does oils and fats. Admittedly vegetable oils are worse for causing cancer than animal fats, thought the worst cancer risk comes from combining them. The McDougall diet deals with that by simply cutting them both out, fully.

Simple carbs are a bigger culprit than complex carbs, so a person that eats veggies and low glycemic index starches like sweet potatoes, while avoiding table sugar and added fat, has a better chance of fighting cancer than someone who gorges on donuts, just because they are “vegetarian”, for example.

The roasted food problem is an issue, so cancer patients should probably use the least food-altering cooking methods such as boiling or steaming. Baking sweet potatoes isn’t that much of an issue though, since only the skin changes chemically from the heat.

The worry about the Keto diet is that animal proteins feed cancer as well. From this article, you have this quote:

“The protein and cancer correlation is a well-established trend that was first widely accepted in a published study from 1968, according to Campbell. That study, and several that later confirmed it, found that rats that were fed a diet of 20 percent protein got tumors on their liver 100 percent of the time (30 out of 30), whereas the ones that were fed a lower (5%) protein diet got no tumors (0 out of 12 subjects).”