Had to give up abilify after first day

It did for me! I am so unlucky because it fixed my negative symptoms! The FDA has warnings about those:

“The U.S. Food and Drug Administration (FDA) is warning that compulsive or uncontrollable urges to gamble, binge eat, shop, and have sex have been reported with the use of the antipsychotic drug aripiprazole (Abilify, Abilify Maintena, Aristada, and generics).”

I wasn’t fully stable on 120mg Latuda and gave me terrible akathisia and nausea/vomiting. I read that its 55% weaker than Risperdal. Now I am stable on just 4mg Risperdal!

It did for me! I am so unlucky because it fixed my negative symptoms! The FDA has warnings about those:

Well you are not out of options with second generation atypical APs still. Caplyta, Vraylar. They work differently IIRC.

Abilify, Rexulti and Vraylar are the only partial dopamine agonists. Rexulti has the same FDA warnings as Abilify so I refused it when my pdr prescribed it. I didn’t pickup the prescription. Vraylar is supposed to come out here in Canada by end of this year hopefully.

I went onto Abilify and suffered a relapse. It really, really didn’t agree with me. My sleep was disrupted to such an extent than I became paranoid and hostile.

Do you have sexual dysfunktion on invega after 5 years?

Caplyta is also a partial agonist

I couldn’t tolerate Abilify either. Only was ever on it for 10 days and I was miserable for all those days.

I also had bad side effects from abilify and the withdrawal was the worst thing ever I was vomiting , shaking and my body wad in complete pain

No i don t have.i have good sex life.np at all

Caplyta is also a partial agonist

Where did you read that? Wikipedia says its a dopamine antagonist. 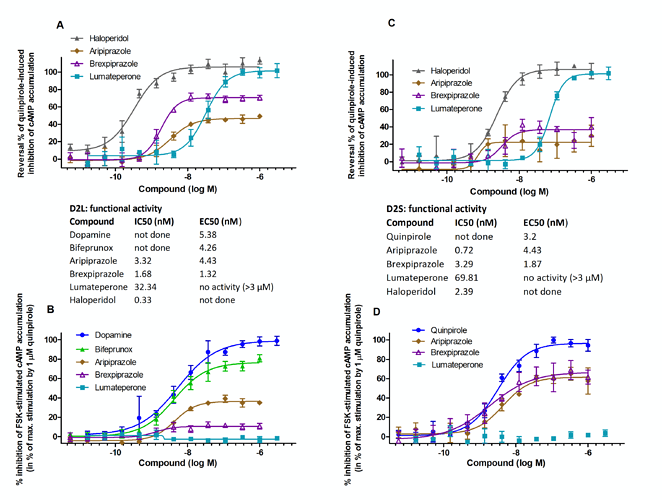 I don’t understand, can you explain? They say it acts as a postsynaptic antagonist. Its confusing.

But then overall its a dopamine antagonist depleting presynaptic dopamine and blocking it postsynaptically.

The dopamine effects are happening postsynaptically. Receptors are on the postsynaptic neuron.

I had a few psychology courses but don’t remember all.

Aripiprazole, sold under the brand name Abilify among others, is an atypical antipsychotic. It is primarily used in the treatment of schizophrenia and bipolar disorder. Other uses include as an add-on treatment in major depressive disorder, tic disorders and irritability associated with autism. It is taken by mouth or injection into a muscle. A Cochrane review found only weak evidence of effectiveness in treating schizophrenia. In adults, side effects with greater than 10% incidence include weig...

If you check pharmalogy of abilify, it works the same way. Presynaptic agonist and post synaptic antagonist

Can you quote what you just said?