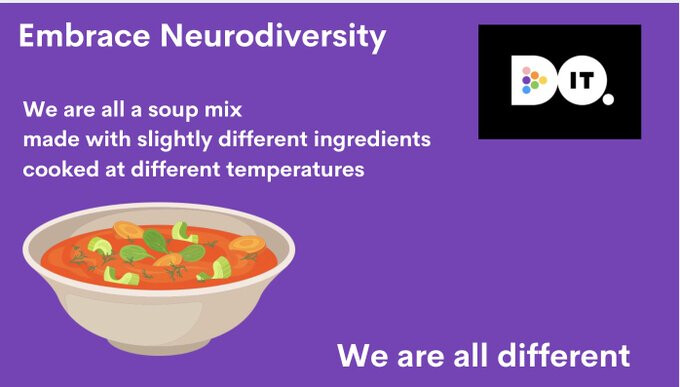 As much as I like soup I hope this is satirical

As much as I like soup I hope this is satirical

I’m very fortunate to have an employer that embraces neurodiversity.

It’s not the neurodiversity bit that I object to.

It’s not the neurodiversity bit that I object to.

I think comparing neurodiversity to a bag of rabid, greased weasels on acid would be more accurate.

@velociraptor Haha, I feel like I’ve accidentally stumbled into an alternate reality where @firemonkey and @san_pedro (and no disrespect to either for I respect both) have swapped posting styles. What will be next, @LittleMissSlothy biting ankles and making Jurassic noises or you claiming you’re getting kidnapped, thrown in a submarine and coerced into becoming Bulgaria’s next agriculture minister?

Come on, “neurodiversity is a little bit like a soup”. But I do realise now that there’s quite a bit of appetite here for this sort of dish.

PS. @firemonkey Once again, I’m not being serious.

But I do realise now that there’s quite a bit of appetite here for this sort of dish.

When I first got mowed down by SZ I spent a good part of my day just being a lump. Couldn’t read. Couldn’t hold a conversation. Couldn’t even get myself to a bathroom on my own at the outset. The fact that I can interact with others, use humour (badly) and make acquaintances not to mention the occasional friend now is a real victory. I know the casual chat makes you nuts but it’s a critical part of recovery for many of us. That’s a piece of our lives reclaimed and it feels awesome.

My wife says I laugh at the wrong things, but she watches British television so her judgement is suspect.

What do you object to

I like your soup analogy. Especially in winter time.

Too many people are coming at me like they’re entitled to access to MY body. They need to stay the ■■■■ away from me.

The memetic cheesy quality of the soup analogy. But once again it’s not a serious objection.

I read Helen Keller last night and she wrote about how she experienced everything through touch and I realized I experience things very differently than others because of my lack of intellectual and sexual light.