I can type pretty fast you know

I love you @flameoftherhine you’re my dear brother.

I noticed… it seems like @Chess24 is writing a book…

Lol this is funny. Now I can no longer write, edit and delete afterwards.

I’m out of here, this is insane

If you reply there’s an icon on the top right that shows who’s replying too. Like I can see @flameoftherhine

I just happen to have ET on VHS and willing to let it go for the low low price of $24.95, Order now, while it is still in stock!!! 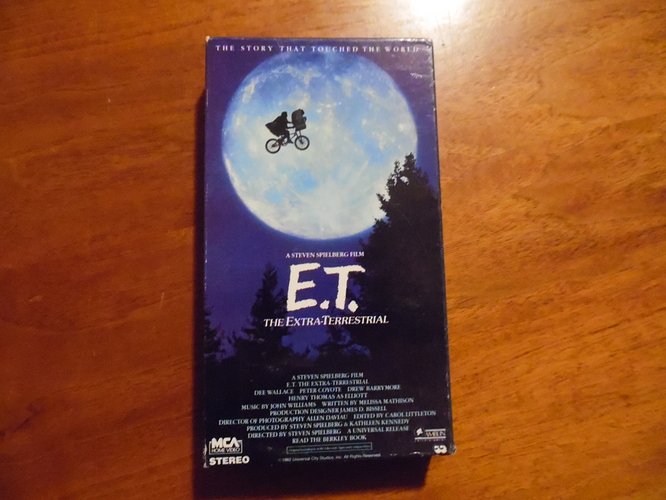 I bet they have a digitally remastered version…

@flameoftherhine E.T. is not worthy of being digitally remastered though it was the highest grossing movie in the 1980s until Independence Day came out in the mid 1990s.

I like ET because it reminds me of my childhood. When it was released we had a pirate VHS copy (I think everybody knew someone who had it) and my family all watched it together through the snow and distortion. Not a dry eye in the house.

I agree… but its Spielberg… people love him for some reason…

On the movie note… H.P Lovecraft may get a movie finally… the call of cthulu movie has a kick starter/crowd funding page going…

No, but I like the sequel where E.T. goes on a road trip with Hunter S. Thompson.

In all seriousness I like the movie for sentimental reasons, grew up with it and all. But it’s probably not a movie I would go out of my way to watch or buy.

E.T. gave me nightmares when I was a kid.

Really, everything gave me nightmares when I was a kid,

But I’m pretty sure E.T. planted the seeds of “government conspiracy” that soon blossomed…

You know, dudes in suits just coming and putting your family in quarantine with no repercussions.

That’s pretty interesting. I own a Hunter S. Thompson book, I’ve yet to read it though.