I haven’t been on much the past few days. I’ve had problems with my baby girl (my 10 year old tortishell cat). We had to take her to the emergency vet Thursday…well her second trip there, the first one was a scanning to figure out why she was having troubles breathing. The trip Thursday they kept her all morning, drew some blood had to shave a small part of her front legs to get IV’s and whatnot in her. We still brought her home Thursday afternoon (okayed by the vet seeing her). She was having an even harder time breathing after whatever they did to her. Yesterday she spent 98% of her time hiding under the bed, struggling with breathing still.

We’ve been giving her med’s, one they gave us the first visit we took her in, after the second they gave her some steroid medicine. Today she’s starting to act like her old self. She was out and wandering around the apartment on her own. She sat in her window and sunbathed for a while, she’s been eating a lot (a side effect of the steroid drug).

All I know from the doctor is they think it’s some kind of inflation in her lung but they couldn’t tell us where or how it developed. They sent blood and urine samples off for lab work and I’m supposed to hear more later this week.

I was so worried about my kitty and her breathing I had a really bad panic attack. I don’t know if it was more an Anxiety attack, Do you think there’s a difference between panic attacks and anxiety attacks? I don’t know if I was really panicked or just overwhelmed with everything going on. For those that suffer from anxiety/panic attacks what do you do to bring yourself out of them? Is there a way to avoid them? I know stress triggers a lot of my problems, but sometimes you just can’t avoid stress. How can learn to handle stress without having a panic attack because of the situation?

I’m so sorry about your kitty!

When I have anxiety attacks I start to breathe deeply, slowly counting to 10 or sometimes from 10 backwards.

Like jukebox usually says, remember it’s all in your head, you’re not going to die from it.

Good luck with your kitty, hope she gets better.

When my dog has an emergency I have a lot of anxiety and it can push me into psychosis.

I don’t really have an answer to how to deal with it, I just want you to know that very stressful things like a sick pet can make you worse because you love them.

Usually I go to bed and take an extra benzo or antipsychotic to deal and just let the stress work out over the week.

Kitty’s been doing much better. She jumped up on the bed a few times all on her own…once wanted me to put her up there. Today she even jumped up on my lap and watched a little TV with us. That made me so happy. I can still she her at times finding it hard to breathe, especially if she was exhorting herself (like jumping up on something) but she was easily able to calm herself down after a second or two. She is still letting us give her, her medication but under protest. She doesn’t like it but she knows it makes her feel better, because after she’s done and runs off she’ll come back up to me and rub up against my foot.

Glad to hear your kitty is feeling better.

Picture of the little girl giving me so much stress this past week. 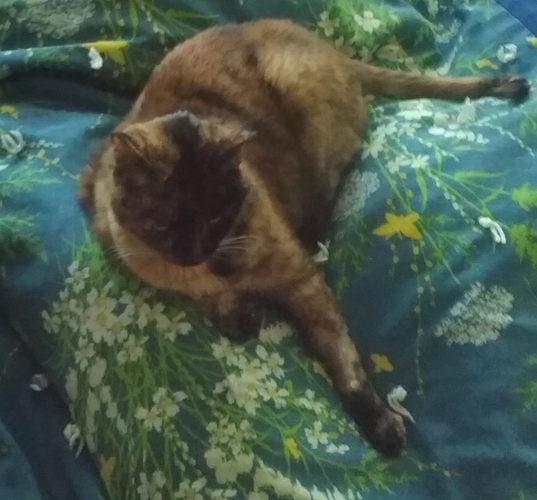 im sorry about your cat, i hope she gets better soon.

i have a cat and i know how upset you are.

seems like shes back to her old self bless her

just think how we go to doctors and can get help
you are a kind generous owner who looks after your baby and she knows that.

just be reassured shes on the mend bless her

Hugs to you and your furbaby. I hope to hear better news soon from you on this.

Glad she is feeling better.

Just remember you can’t die from a panic attack. Just breathe in slow and deep and try to relax. You cat is great!

little poop is still struggling when we try and give her, her medicine. It’s like she lets us do it, but under severe protest. One flavor she likes because they made it taste like tuna (one of her favorites) but she still has a little bit of the other one. The vet told us to give her both until they’re gone. It’ll probably be easier once we’re out of the one she doesn’t like.