Come to think about it 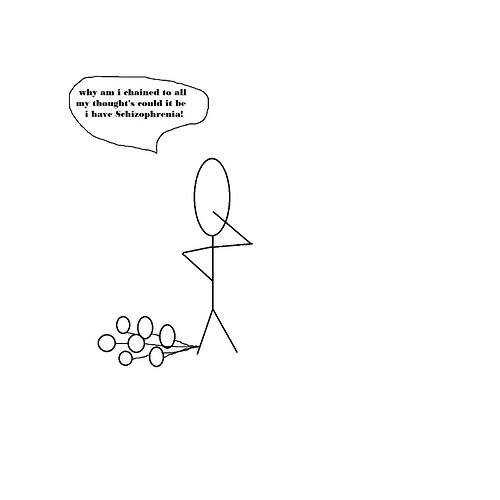 I can’t read what it says. The letters are too small

It says “Why am I chained to all my thoughts. Could it be I have schizophrenia”.

Your thoughts are so similarly round. Mine would coming out all over. They’d be different too. Lol

I thought they were a bunch of balloons and the helium had gone out of all of them. I was wondering why a guy would have a million balloons tied to his one leg…

That proves that I have schizophrenia because I have such a strange mind though.

HE Got his balloons after valentine’s day. I thought the same thing at first.

Bondage to me is when I can’t think about what I want to think about. When I think a certain train-of-thought I get stuck and can’t proceed any further. Also I am not permitted to ask certain questions in my mind. But I don’t really want freedom at this time because I have negativity and possibly harmful emotions like intense anger.