The United Nations predicts that the temperature will go up by 2.7 degrees Celsius (4.9 degrees Fahrenheit) by the end of the century. I do not see that we have the will of the world to tackle this problem. Therefore we will have lots of climate events.
The only solution I have is religious. That’s all I will say about this.
If anyone has any other solutions I would welcome your comments.

There are technologies that will come along that we haven’t even fathomed yet by the end of the century that will help with the environmental problems we currently have. If we can nail carbon capture technology and fusion energy that will be huge. I’m a little concerned but I haven’t given up hope and I don’t think a climate disaster is a certainty.

It seems to me that the main thing we can act on is greenhouse gas emissions.
That is to say less cars / planes / trucks etc, eat locally made products, stop drilling new oil fields, reduce the share of meat food, buy differently.

Afterwards, I also hope that technologies can help us, but unfortunately that will not be enough.

The United Nations predicts that the temperature will go up by 2.7 degrees Celsius

Can you post your source? That sounds a bit high but I don’t have anything to dispute it.

Nevermind, I did some research on my own on the predictions about the temperature at the end of the century. It seems to vary wildly based on who is predicting it. Your source would just we one more of many predictions I looked at.

My source is today’s Washington Post in the A section.

I found it online btw. But you have to pay to view the entire article.

A U.N. analysis released Friday shows all of the new pledges countries have made in the run-up to November’s talks, if implemented, would result in a 12 percent decrease in emissions by 2030 — well short of the 45 percent cut needed to keep the world...

It pains me that nothing can stop this from happening, but my advice is to not worry about it.

99.9% of all life that has ever existed on Earth is now extinct

We’re just the ones who pulled the trigger ourselves.

The legacy we have will not endure, and I am sure we’ll disappear over thousands of years and it might start all over again, it might not 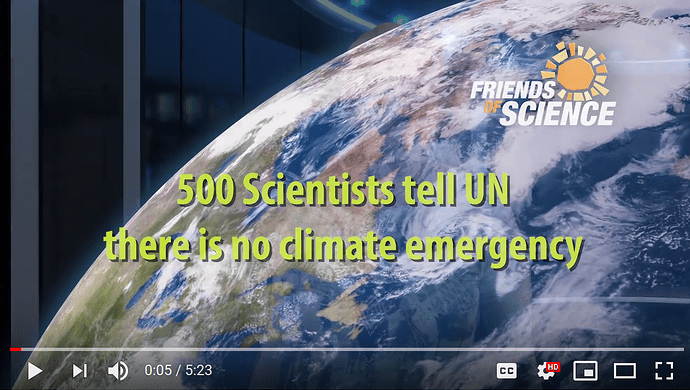 There is no climate emergency, say 500 experts in letter to the United Nations...

The video above is from Friends of Science, a Canada-based “non-profit organization run by dedicated volunteers comprised mainly of active and retired earth and atmospheric scientists, engineers, and other professionals.” On the same day last week...

Thus Subject Has Been Spoken About In Some Inner Circles For Many Years Now.

As Their Voices Began As A Fraction Of Pebbles Among A Distant Ocean.

The Danger And Threat Is Very Real.

The Extreme Amount Of Force Mother Nature And Father Time Waves Towards Humanity.

Is Still Uncertain Within 100% Locked Vaults Of Endless Blame, Bickering And Ignorance.

No Need To Discard Your Normal Everyday Part Of Existence Though.

Perhaps Do Quick Official Government Research And Do Your Part.

For It Doesn’t Take Much Wandering During The Quickly Cycling And Fading Season’s.

To Realize, Some Trouble Is Afoot.