I thought my doctors were full of ■■■■ and that I was not crazy. I said to shove the psychosis NOS diagnosis up an ass.

Cannabis withdrawal isn’t known to cause psychosis. It is a real disorder that has been observed and included in the handbook of clinicians, however.

I don’t know about chlamydia interacting with schizophrenia. That’s a medical student thing. I’m studying psychology, which involves health psych later on in a doctoral program, but some schools have it in undergrad.

I am on a ton of pills. I still have some voices and crappy thoughts but I do well to ignore them.

I am sorry that I don’t know about chlamydia, but if you google.scholar search the keywords “chlamydia and psychosis” you will probably find some stuff- when you do, read the latest and most cited articles. Those are often the ones with the best findings.

No worries about what you don’t know about

I actually read a ton of places that cannabis withdrawal can cause psychosis… My shrink actually pulled me out a 45 page booklet he found online about how cannabis causes psychosis… Espically when you’re withdrawlig and under server aniexty! I’m planning on going to an std clinic Friday, sadly every time I was on the antibiotics I fell off them or re infected myself and didn’t know about that until now (sadly) … My moms good friend had schizophrenia and said that she would just ignore the voices when they came, what helps you the best… And could you read my whole paragraph up there and see if it sounds like some stuff you were hearing when it first started ^? Thank you for all your help

I don’t feel like I’m schizophrenic just someone with psychosis in my eyes. I might try another shrink or two to see what they have to say

I have not heard of cannabis withdrawal psychosis, but I know someone who overdosed on pot and became psychotic and had to take Thorazine for two weeks.

Whatever the psychiatrist said is true, probably unless you didn’t tell him the whole story like on here. Maybe it is withdrawals from cannabis. But I think it sounds like the weed made you psychotic (ate a weed cookie then went florid), and smoking weed all day every day for years is a big deal. I have a friend who had something like this from too much weed, I told him to take a break and he did and it cleared up.

That’s all I can make of this. The DSM (psychiatry and clinical psychology handbook) doesn’t say that psychosis is typical with withdrawal from weed. It actually says zero about that.

But overdose is a thing. And it sounds like you did it, so take the Ativan and don’t smoke or eat just don’t take any weed, ever.

Sorry this happened to you, I know how scary this can be. But that much weed is a better explanation for your problems than organic schizophrenia. Organic schizophrenia often sneaks up on people. It also gets triggered by weed in some cases, but you don’t seem like you have real schizophrenia. Not from what you said. That much weed for that long would have had you in a mental hospital years ago if you had the genes associated with the whole trigger thing.

never heard of cannabis withdrawal psychosis, but have heard of drug induced psychosis-that’s what I have from smoking ganja

Sounds possibly like the psych upshots of the allostatic load caused by chronic stress on a genetic set-up oversensitive to cannibis.

Fits my 29 years of experience working with recovering pot heads, as well.

The following psychotherapies are germane here:

And once you have those down (one can “get” them via workbooks like those listed below), one can sort of sum them up and maintain them on a daily basis with…

10 StEP – Pair A Docks: The 10 StEPs of Emotion Processing 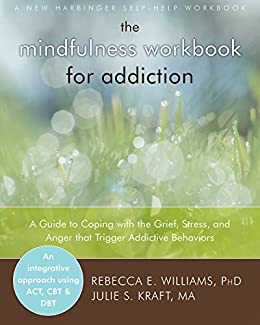 The Mindfulness Workbook for Addiction: A Guide to Coping with the Grief, Stress...

The Mindfulness Workbook for Addiction: A Guide to Coping with the Grief, Stress and Anger that Trigger Addictive Behaviors (A New Harbinger Self-Help Workbook) - Kindle edition by Kraft MA, Julie S. , Kraft, Julie S.. Download it once and read it on...

Just browsing the websites at the links I gave you will answer a lot of your questions, I am pretty sure.

yoo dude I read your story, man feels like I’m reading about myself I got off the choof a while back and told my doc about it and all and asked him for something to help me replace the ganja! now its been 7 years and brooo I tell you the craziest thoughts run through my head just like you, I wanna talk to you in private what’s a good way for that?

Thank you so so much for your help I can’t thank you enough, I don’t think it was the handbook your talking about but just a lot of info on cannabis psychosis he found… The psychosis didn’t happen until two weeks to the exact day of me smoking last, so I don’t know if I would consider this and overdose yet along sever aniexty from everything that’s happening to me along with the withdrawal causing psychosis.

But trust me, I don’t even Wana touch any type of weed every again. I’ve learned how harmful it is to people, espically me who get psychosis from it. I use to look at weed as a drug that harmed no one but now I honestly feel like it should never be legalized. Everyone’s body is different tho.

I’ve told the psychiatrist every single thing I posted on here, maybe even more. I’ve had two random cases of psychosis before. One after my first time smoking really potent cannabis, and one after seeing really violet video online. No one in either side of my family has any type of mental issues, yet alone schizophrenia. I honestly am tapering off Ativan right now because of how bad of withdrawals it’s giving me after taking it for only 20 days, it’s a really scary drug and I don’t Wana be any more dependent on it ever again. I rather try to fix myself the natural way because my body reacts to pills really bad, same with my dad. I just hope this will one day all go away and I’ll be able to think normal again

I’m glad you found my words useful. Hey, you should definitely keep seeing the psychiatrist above all else right now. Something is going on with you and it looks dangerous to your mental health.

Defiantly praying its cannabis withdrawal psychosis because that’ll eventually go away… Just hoping it’s not something permante that’ll I’ll have forever… It’s all in gods hands now. Thank you again

Message me on here bro, or email me chasericksurfs@gmail.com

Thank you for all the info! I’ll look into everything you posted… I mean what the pscyatrist read me is the withdrawal can cause it if you were a super heavy smoker, under a lot of stress and aniexty, which fits me. I just don’t know how to feel about all this, and I’ll literally do anything to try and be “normal” again. Praying this goes away in a couple months

Praying this goes away in a couple months

All one really has to do is learn from those books and therapies how to sit still and look straight into the eye of the emotional hurricane that’s really nothing more than a collection of chemical imbalances that will re-balance if they are allowed to.

im trying… Its just i can’t get the thoughts to stop. they’re getting really bad since ive been trying to get off the ativan… It’s hard to live a normal life and be happy when whenever you’re not distracted you have all these weird thoughts about hurting people you love, and a blockage of thought… I dont know how to really explain whats happeing to me. But it gives me horrible aniexty like i could die soon or will be crazy forever

since ive been trying to get off the ativan

Ugh. Benzodiazepine withdrawal effect. How many mgs were you taking a day, and how much are you taking now? It’s gotta be a phased taper, especially when an hallucinogen is involved.

sadly my shrink F****d me… and put me on 2mg 3/4 times a day. lucky enough, i only took one a day,two on the worst days (half and half) so i would say 3-4mg a day for a month… I dont know how to taper off them no one will give me advice, and the benzo withdrawl is just making the psychosis so much worse in ever way

how many of you guys think this is weed and how many of you think it’s aniexty/stress/depression ? In a perfect world i would be cured of all this, and able to maybe one day occasionally smoke again… I just dont feel like myself and thats the horrible part about everything im dealing with

I think whatever kind of psychosis it is, you need to take the meds as prescribed, follow your treatment plan and be better. Then after you get better, you can decide if you can taper off the meds. If you do it while you’re still psychotic your brain will recieve more damage from psychosis.

I’m still not convinced you don’t have sz, because I was also convinced for a year that I had drug induced psychosis instead of sz. So you can be in denial, but whatever your diagnosis actually is, you need to follow the treatment your doctor prescribed you. Messing with meds won’t get you to get better.

No… even when I ended up drug and alcohol free… the head circus was still in full swing.

I have a feeling that for me… there was just a genetic switch in my head… and the drugs helped turn that switch on. (one of many factors)

What ever is going on… don’t try and navigate these waters alone. Hopefully a doc or a therapist… someone can give you some ideas so your not suffering.

Good luck and hope things get better for you soon

I just feel like it’s not schizophrenia because of how in touch with reality I am, I don’t really have more than one voice talking to me and when I do it’s just a voice telling me to do something bad to the person I’m looking at then my concious corrects it. I really don’t wana be on Ativan any longer, yes it makes me feel so much better almost normal… But the more dependent I am on it the more hell its gonna be withdrawling from it… Read somewhere the withdraw from Ativan is worse than heriore. Honestly if it is schiz, and ends up being my worst nightmare I think I’ll end up being able to cope. Will defiantly be on this forum constantly if it is tho lol

Thank you, I’ve been smoking for 4 years, haven’t really done any other drugs but I use to smoke spice (smoked it prob under 9 times) back when I was a freshman in high school. So I don’t know why this all assudden happened to me now. I’m hoping it’s the withdrawal aniexty and all that causing my psychosis… It’s been about a month with these voices and that’s what worries me the most