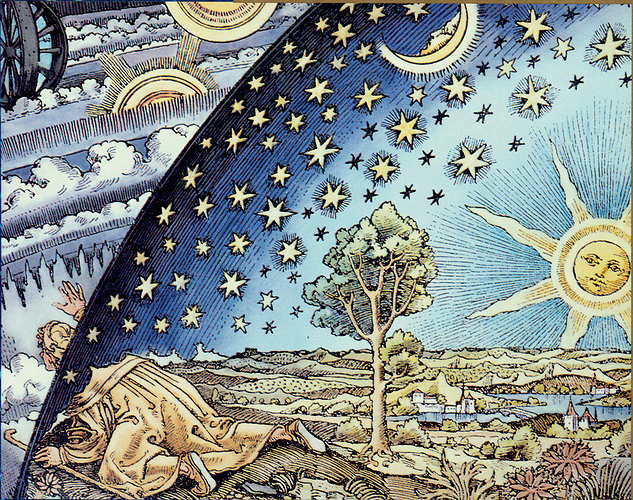 I don’t know why but this is probably one of my favorite paintings ive ever seen.

That’s kool! Do you know the artist’s name?

No idea. Just saw it in astronomy class one day and said “wow thats cool”

The Flammarion Engraving or “Where Heaven and Earth Meet, 1888”. There are lots of cool colorized versions if you google it. The Flammarion engraving is a wood engraving by an unknown artist, so named because its first documented appearance is in Camille Flammarion's 1888 book L'atmosphère: météorologie populaire ("The Atmosphere: Popular Meteorology"). The engraving has often, but erroneously, been referred to as a woodcut. It has been used to represent a supposedly medieval cosmology, including a flat earth bounded by a solid and opaque sky, or firmament, and also as a metaphorical illustration of either the scien

Nice. Thanks for posting it.

That picture was in one of my text books. In my unmedicated days I made a pot and put that night + day on it with added clay. That tree looks like one I sat under in my mind once.

It’s a great picture. I’ve always wanted an excuse to post my own favourite piece of art so here it is (it’s a colour photograph from 1920) :

I like the picture @Kazuma - reminds me of my Avatar

I used to have a “birthday book” where they took every day of the year and told you what you are all about. My day was the “cosmic comic”. that’s all I remember but the front of the book just showed a tapered picture of the sun and the immediate area around it.

@jukebox Was it called “You are your birthday” can’t remember the author, but I had this book and it was dead-on descriptive of everyone that read it.

No it was called “the birthday book” I believe. I might be wrong but it wasn’t “you are your birthday” good to see you on here. Please post more @Csummers

Wish I had more time to post, I keep sneaking back on here just to keep what sanity I might have left.
Hugs to you @jukebox!