I am a huge physics nerd, ever since high school. I admired Einstein’s theory of relativity, the strange theories of quantum mechanics, quantum field theory, and the idea of string theory.

Any physics fans out there?

I used to be. In fact the last book I read, before I lost the concentration to read was this 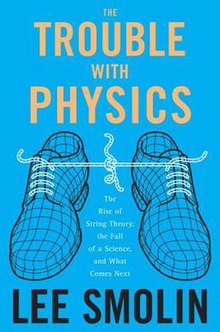 The Trouble with Physics

The Trouble with Physics: The Rise of String Theory, the Fall of a Science, and What Comes Next is a 2006 book by the theoretical physicist Lee Smolin about the problems with string theory. The book strongly criticizes string theory and its prominence in contemporary theoretical physics, on the grounds that string theory has yet to come up with a single prediction that can be verified using any technology that is likely to be feasible within our lifetimes. Smolin also focuses on the difficulties ...

I would have to disagree with you.

What do you think about relativity?

Don’t trust atoms. They make up everything.

It’s incompatible with quantum physics. And that’s the big conundrum in physics.

I remember reading this book about time and was fascinated by it.

About Time: Einstein's Unfinished Revolution (ISBN 978-0-684-81822-1), published in 1995, is the second book written by Paul Davies, regarding the subject of time. His first book on time was his The Physics of Time Asymmetry (1977)(ISBN 0-520-02825-2). The intended audience is the general public, rather than science academics. About Time explores selected mysteries of spacetime, following on from Albert Einstein's theory of relativity, which Davies believes does not fully explain time as humans ...

That’s what string theory does, it ties relativity and quantum mechanics together. Both theory’s being proven through experiment.

I know next to nothing about physics. I only know pre college algebra. I remember one spring I went to college and took a non college credit course in algebra and it was painful work but I found satisfaction in it. Is it true the math can be translated into a literary form? That might not sound like it makes sense and it may not, it was just a dream. I’d really freak out if out of the blue I suddenly had mathematical knowledge beyond my schooling.

Yes I’m a physics fan. But also a chemistry, biology and maths fan. It’s all very beautiful to me.

I used to enjoy solving physics problems in high school. I also took several courses at uni, but the math got a bit too advanced and my teacher didn’t properly explain some concepts, so I gradually fell behind…

I think I might still be able to compute the efficiency of a reversible thermodynamic cycle, to apply Kirchhoff’s laws in solving a circuit, or to do a basic Lorentz transform. But beyond that I’m in the dark.