And the billboard music artist of the decade goes to 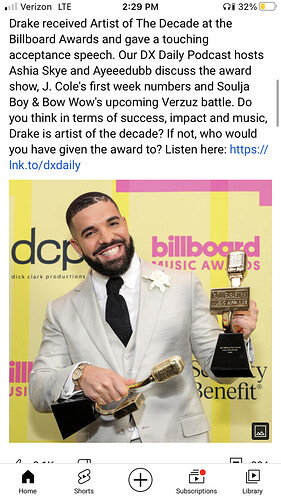 Huh. I use the Billboard list like I use the Oscars… Great way to know what I need to avoid.

Tech n9ne is sick. The am I a psycho song with hopsin and bob is the best song ever about schizophrenia. Will post in a second.

But will never get the mainstream props he deserves. Yup J Cole shoulda won. I’d rather see 6 years of post Malone than ten years of drake winning.

The Weeknd shoulda won over drake as well.

Oh how could i forget Mac Miller. He shoulda won. But I’m not very surprised that he didn’t…

The talent pool must be extremely small if he’s ‘artist of the decade’.

Do u think it should have been a rapper? It said artist ? Although the weekend is not a rapper but while I don’t like drake particularly he has way more hits then J Cole. It could have been drake Taylor swift or Beyonce maybe I don’t know but yea I agree j Cole is a great mc. The weekend is a big name he could have won. J Cole I don’t think has sold as many records as drake. Drake is probably one of if not the top selling artist of the decade though maybe with the weekend and Bruno Mars up their too. Music sucks now ha ha! I can’t believe I mentioned Taylor swift but she’s a big time name you have to admit.

I don’t care much about big names as much as impact and talent . J Cole has more classic albums, classic songs, has had a bigger impact on art than anyone imo. I Understand drake has had the most success of any hip hop artist in the decade. But I go with different factors. Popularity is important. BUt who are you going to remember in 100 years. Taylor swift or j Cole. Maybe some swift. But J Cole is the closest thing to Tupac of this past decade

The way he’s inspired others. His growth. His persona. His wisdom. He’s like a modern day bob Marley imo. In terms of his revolutionary impact

Tbh I’d put Kanye before a lot of others

she has like a group of writers for every song.

I think drake is a pop rapper who doesn’t write his own lyrics. He’s alright but I think about legacy of the 2010s. Who made the most legacy. No way j Cole had any chance to win the award . He probably didn’t finish top 5. But yeah I give Weeknd the nod for best pop star of the decade based on talent and impact and legacy over drake, and even Bruno Mars too.

Eminem in the convo but he wouldn’t win this decade

I think all 5 were good

This is one of my favorite songs of the last many years.

Yea I’ll check out his other stuff I own forest hills becuase I worked with a young guy who knew all the latest music at the time…not very familiar with his other stuff…Kendrick was great too another LA guy but he hasn’t made any new music recently that I know about. lil Wayne was another rapper who was popular at a weird time but he was huge like in 08 and hasn’t been as big the last few years.

I think Kanye shoulda won the 00s. But j coles new album is maybe his best. It’s still trending on YouTube it’s new. Pride is the devil is my favorite song on it