Get pdf of the study here: [1] Its good for people who wish to avoid weight gain and blood tests

Comparative efficacy and tolerability of 32 oral antipsychotics for the acute treatment of adults with multi-episode schizophrenia: a systematic review and network meta-analysis

What is amulsipride? Is it a antipsychotic?

I thought Clozapine was ranked 1st with Ami 2nd.

Have been stable on Amisulpride for over two years now.

What is amulsipride? Is it a antipsychotic?

Yes its an antipsychotic. But its not available in usa or canada

This many times posted study says Clozapine is the most effective…
Can you cite where you read that Clozapine isn’t 1st?

Every source on the internet says Clozapine is 1st.

89% of participants improved with Clozapine.

I am on 525mg of clozaril, works great for me, i have been on it about ten years now, side effectsare hard at times but the pros outweigh the cons!

Can you cite where you read that Clozapine isn’t 1st? 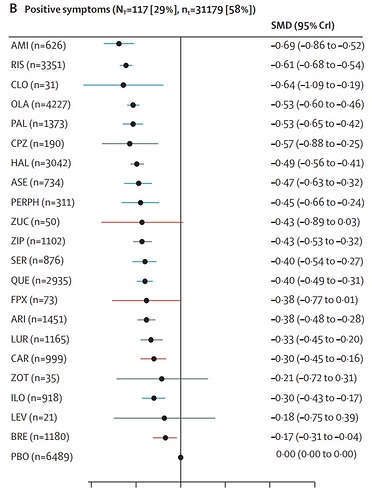 I would be very wary of placing too much value on Amisulpride’s ‘superior’ performance.

What was their P value? was it greater than 0.05? (It implies correlation/effectivness)

Thats true for overall symptoms. But i think maybe clozapine and amisulpride is equal in reducing positive symptoms.

N is the number of patients taking it.

Which strongly points to this result being an outlier , until there are further results pointing in the same direction,

Amisulpride has kept me relatively stable for seven years now

I was on clozapine for eight months in 2004 and it made me into zombie. I don’t think I was on it long enough to see its good effects. But I got it stopped because of unbearable side effects