Am I missing something: does hollywood really glamorize opiate use?

I’m thinking about the glamorization of drugs in Hollywood.

Cigarettes-Glamorized like crazy. The cigarette smoker is always cool, rebellious, you don’t see their health problems
Alcohol-Glamorized like crazy. The alcohol drinker will drink a lot and then fight the bad guys. or something. Doesn’t really work that way.
Pot-OMG it’s so fun and funny!!! Certainly glamorized a bunch.
Cocaine-The cocaine addict in Hollywood is always powerful, ambitious, rich, successful, etc… They never turn to crack which is what usually happens
Hallucinogens-It’s funny and tripppppppy watching a hallucinogen user. Think Fear and Loathing in Las Vegas. They usually are having a “bad trip” in a movie, but the bad trip is never quite as damaging and bad as it is in real life

Now Opiates-I asked my roommate “Why do so many people do opiates?” and he said “Cuz its the Hollywood glamour drug.” Now I think the above substances are more glamorized by Hollywood. Opiates are so boring in a fictional setting. The pleasure is derived by the user alone. If anything I think Hollywood demonizes opiate use (trainspotting, requiem, etc…)…I know people do opiates because they start off with a prescription then move on to heroin. But the people who don’t??? I don’t think it has to do with the glamour of it??? Or maybe it does and I’m just missing those movies. What are your thoughts on this??

Either way drugs are bad. Although I have a bias towards weed not being as bad as people say. But that’s just because it doesn’t affect ME so badly. So I’m biased yeah.

Hollywood loves to Glamorize drug use, for the most part.

All I know is that one horrific bad trip with Mescaline nearly destroyed me completely - a long time ago.

I’m now wondering if it was really Mescaline that I took.

It was really potent stuff - reality was completely distorted.

I had zero concept of time seemed like forever.

I’m thinking that it could have been acid - LSD.

It triggered me into a long and deep psychotic break afterwards.

Mescaline is very similar to LSD so it could have been mescaline. Definitely a very powerful experience regardless of your brain make-up.

One of my favorite books is about mescaline 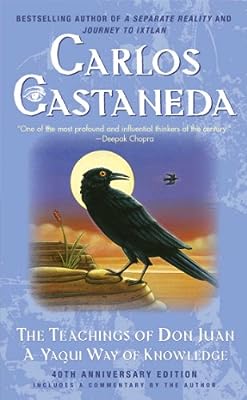 A Yaqui way of knowledge. The teachings of don Juan is the story of a remarkable journey: the first awesome steps on the road to becoming a "man of knowledge" -- the road that continues with A Separat ...

Yeah I read it a while ago in High School

Speaking of which, I bet they could turn it into a good movie. And glamorize drug use some more!!!