After Schizophrenia Diagnosis, a Sense of Clarity and a Place of His Own

The visions started when Lavelle Lockett was 18. They came in the form of blurry, silent figures, and when they arrived, he knew to stay away. He avoided them like the people he had seen in the alleys where he lived on and off for much of his life, until November 2014. That is when, at 24, he was hospitalized and told he had schizophrenia.

Mr. Lockett, who is 26 and has a thin frame and square glasses, looks back at those six turbulent years with what-ifs. He said the trajectory of his life — the encounters with the police, the sleepless nights riding the subway — could have been avoided if he had received the diagnosis earlier. But now, he said, he is focused on changing the way he is perceived.

“I just want people to think of me as a nice guy,” Mr. Lockett said in a soft voice, drumming his fingers on a table. 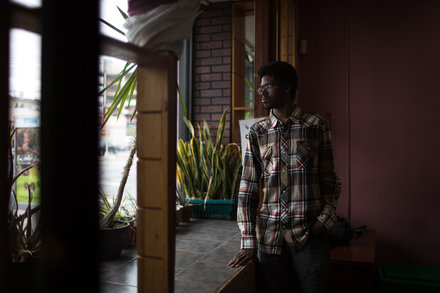 After Schizophrenia Diagnosis, a Sense of Clarity and a Place of His Own

Lavelle Lockett, 26, had been homeless when he was hospitalized at a psychiatric center. Two years later, he has an apartment and hopes to attend college.