A book my pdoc always holds on her table 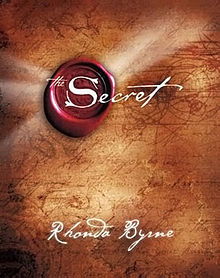 The Secret is a best-selling 2006 self-help book written by Rhonda Byrne, based on the earlier film of the same name. It is based on the law of attraction and claims that positive thinking can create life-changing results such as increased happiness, health, and wealth. The book has sold more than 19 million copies worldwide and has been translated into 46 languages. It has attracted a great deal of controversy and criticism for its claims, and has been parodied on several TV programs.

The law of attraction

Law of attraction
The Secret posits that the law of attraction is a natural law which determines the complete order of the universe and of our personal lives through the process of “like attracts like”. The author claims that as we think and feel, a corresponding frequency is sent out into the universe which attracts back to us events and circumstances on that same frequency

For example, if a person thinks angry thoughts and feels angry, the author claims that said person will attract back events and circumstances that cause them to feel more anger. Conversely, if the person thinks and feels positively, they will attract back positive events and circumstances. Proponents claim that desirable outcomes such as better health, wealth, and happiness can be attracted simply by changing one’s thoughts and feelings.

My thoughts on this? It might be true generally, a positive vibes and all, but not that true that you make a bestseller about it*.

I have a copy, I never read it. Its supposed to be good though. Life changing for people that have issues with themselves but in my opinion my problems are too severe for a book to help

I read it but never actually tried to apply it. I love my catastrophic thinking. Lol

yea me too. Its tough to let go of. It defines me. I like being negative and feeling like Im ■■■■■■ It takes the pressure of of me. God forbid I had to suit up and face the world like a normal person.

Wow, that’s really really deep. I can see the influence from Plato and all the other great thinkers.

Might be true to some extent, but we live in a visual world, for example if we took 10 people, dressed one to look like a 10 and downgraded each other person to the last one looking like a bum, gave them all 20K to in and buy a gold watch in the same store, my guess is the one dressed as a 10 would get the best service and the best deal

So one can be as positive as you could be, but the world would treat you differently if you were not given the gift of looks or wealth. Sad but true you would be kicked back from reaching your goals

My work can be dirty and the stuff I deal with is not pretty, On many occasion’s over the years I have gone to battle with people just cause I looked bad that day, one time I had a guy think he was better than me (bigger load, bigger truck) he thought I should be standing aside to let him through, stood in front of me and said you some ten dollar a hour loser…I looked at him and said your about to find out who I am, I had him banned from the business we were at for good, found out he was getting $12.00 per hour driving the truck, No where near what I make.

My point is life deals us the cards we have to play with, there will be to many variables for that book to be accurate

@MeghillaGorilla1 way to insult my brain chemistry and then delete your post… anyone with half a brain would know that brains are a sensitive topic on this website, so don’t go around telling people their brains are ■■■■■■ up, even if its a joke. Nomad out

you don’t have to put on a show for the ladies, all of our hormones get out of check sometimes but did you really mean to criticize my post. Or do you have no idea what your talking about. Not even sure why Im wasting my time on this.

Why would you delete your post if it was so un-offensive? You said that you bet i would with my crazy ass brain. Wtf do you expect me to respond with, a Hallmark thank you card?

Im not talking about that post @Nomad, I’m talking about the post about being a deep thinker, the likes of Plato and such. Why so hostile? Was there something wrong with what I wrote?

Lol, I was responding to Sarad’s post, and it was directed at the author of the book. i should have clarified that, my bad

oh well in that case I stand corrected. I deleted my post because I thought it was inappropriate. Turns out it was, so… argument settled. It is deep thinking.

I’ve heard one theory, which I believe is only partly true, that the way we express our emotions determines how we feel, not the other way around. We don’t laugh because we feel happy; we’re happy because we laugh. One time I heard this woman say that the key to living for her was to learn to love herself no matter what. That made a lot of sense to me.

Thats exactly what my therapist said. You would be happy if you could just learn to love yourself.
Why does she keep that book though ?

Why does she keep that book though ?

I used to be into all that new age stuff when I was about 20. Then I grew out of it. If I saw that book in a therapists office, I probably wouldn’t go back as a result. But that’s just me. Bah humbug.

The Secret, by Rhonda Byrne, is a self-help tome in which the essential thesis is: if you put your desires “out into the universe” (which is to say, if you think about what you want), then the universe will give you what you want.

The Secret says, if you’re fat and poor, it’s not because you have a crappy job in a terrible economy, or because, after another day working a job you hate, you treat yourself to a deluxe cheeseburger with an extra side of Crisco. It’s because when you stand on the scale in your efficiency apartment, you’re thinking, This sucks, I am fat and poor, not, Hey, universe, I am thin, rich, and wonderful. Oprah’s a huge fan of The Secret, as are those out there who credit it for doing everything from getting them better jobs to ridding them of cancer.

In reality, notions like the one put forth in The Secret have come up over and over through the ages, often claiming to be extensions of spiritual ideas that are exactly the opposite. The real secret, of course, is one that you don’t want to hear and would never shell out your money to learn because it doesn’t feel good, which is exactly why you’re better off hearing it: whatever good or focused thoughts, wishes, or prayers you put out there, ■■■■ happens and it won’t be fair, no matter how many collages you make.

The more you project your wishes, the more futile life seems while you continue to wait. The worst thing that can happen is that your wish actually comes true, because that’s when you think you’ve discovered The Secret, but haven’t. Then, since it’s your nature to have more wishes, it’s only a matter of time until you run into a brick wall of disappointment, which is now your fault, because you’ve failed to do The Secret properly. No matter how much you deserve it, you can’t always get what you want, and that’s life (unless you’re Oprah).

Go ahead and wish, pray, and focus— they help you to know what you want, particularly if it guides you toward keeping your priorities straight and working hard— just don’t take

I hate those kinds of “just be positive and everything will get better” books. To me, it’s like telling a blind person to just open their eyes and they’ll see, or a deaf person to listen and they’ll hear…

There was a famous book about this called “Brightsided”

A sharp-witted knockdown of America's love affair with positive thinking and an urgent call for a new commitment to realism Americans are a "positive" people—cheerful, optimistic, and upbeat: this is ...

I used to believe in this. I was the happiest person in the world, and every time some unspeakable tragedies happened, I would smile and say God works in mysterious ways. But it is all bullsht. Sometimes life looks at your sunny disposition and rewards you by raining down tragedies on you until you crack.

I will say that if you have a good attitude, it is easier to focus on the good things and forget about the bad. But people with good attitudes don’t have more good things happen to them. If that was true, I would have never lost my dad, or gotten raped, or developed schizophrenia. I do still have a good attitude. But it hasn’t brought me anything except the ability to keep going through the bad times. I find this book and the idea behind it deeply insulting.